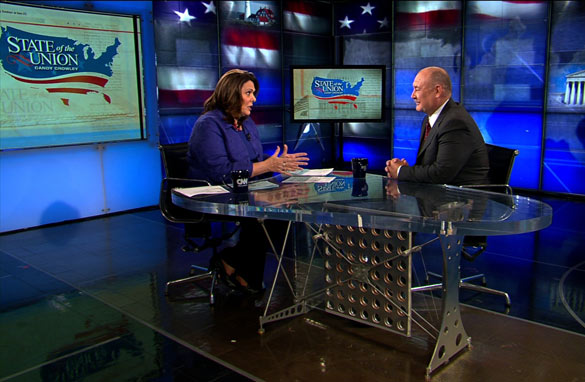 But Allen quickly added that where the energy giant’s performance has been lacking is in having a human touch.
END_OF_DOCUMENT_TOKEN_TO_BE_REPLACED

Obama poses with a local resident during his trip to the Gulfport, Mississippi. (Photo Credit: Getty Images)

Theodore, Alabama (CNN) - President Barack Obama used a lemon-lime snow cone to show that parts of the Gulf Coast remain unaffected by the oil spill –and that he's fully engaged in the ongoing crisis on a day and a half visit to the region.

At his first stop in Gulfport, Mississippi, the president was briefed by Admiral Thad Allen and other officials on the latest effort to cap and contain the oil. And the president said that many locations are still open for tourism and unaffected by the spill.

"We just want to make sure that people who have travel plans down to the Gulf area remain mindful of that, because if people want to know what can they do to help folks down here, one of the best ways to help is to come down here and enjoy the outstanding hospitality," the president said.

END_OF_DOCUMENT_TOKEN_TO_BE_REPLACED

(CNN) - The government's point man overseeing the Gulf oil disaster response told CNN Friday that a more accurate estimate over how much oil is flowing could come over the next few days.

Researchers recently doubled estimates of how much oil has been flowing from the ruptured well, saying Thursday that up to 40,000 barrels - or 1.7 million gallons - a day may have leaked for weeks.

Sensors, Allen said, will soon be placed at the pipe and will help in estimating the flow rate.

END_OF_DOCUMENT_TOKEN_TO_BE_REPLACED

Melancon says Thad Allen 'can get it done'

UPDATE: A senior administration official confirms the BP meeting will take place next Wednesday at the White House.

While the letter doesn’t specifically mention controversial BP CEO Tony Hayward by name, the administration official said “the letter asks the Chairman to bring any appropriate [BP] officials to the meeting and we assume that includes the CEO.”

Haward is scheduled to testify before Congress the following day.

State of the Union: Candy Crowley's Crib Sheet for June 6

[cnn-photo-caption image= http://i2.cdn.turner.com/cnn/2010/images/04/04/art.candycribnew0404.cnn.jpg caption="In her Crib Sheet, CNN's Candy Crowley wraps the news from Sunday's political talk shows."]
It depends on what the definition of “very pleased” is:

Using his newly honed “dial it back” technique, Admiral Thad Allen did a field edit on BP’s statement that it was “very pleased” with its containment lid operation. Allen suggested progress was one thing, but he didn’t think anyone should be pleased as long as there’s oil in the water, which, just guessing, may be a while.

Allen is clearly in all-military mode now, calling the oil an “insidious enemy…holding the Gulf hostage.”

Seems there is a pre-disaster disaster afoot in Florida and Mississippi.  As Nelson put it, “the bad part is, people think there’s oil there,” so they are cancelling vacation plans and not eating the fish. “The biggest negative impact for us“ Barbour says, “has been the news coverage…the average viewer…thinks the whole coast from Florida to Texas is ankle deep in oil.”

For the record, SOTU showed pictures of healthy Gulf birds in the close, just sayin’.

In 25 seconds or less

And finally, a tip of the hat to Gov. Barbour who renewed our belief that he remains one of the best politicians in the country.  Who else, asked to assess how the administration is handling the oil crisis, could both rise above it and jump right in? For your listening pleasure:
END_OF_DOCUMENT_TOKEN_TO_BE_REPLACED

Allen: BP makes progress, but too early for celebration 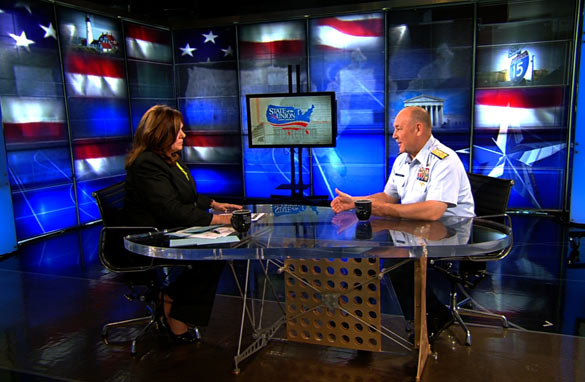 "I don't think anyone should be pleased so long as there's oil in the water," Coast Guard Adm. Thad Allen said Sunday on CNN. (Photo Credit: CNN)

(CNN) - The federal government's response manager to the Gulf oil disaster says BP has made progress, but cautioned it was too early to call the effort a success.

"We're making the right progress. I don't think anyone should be pleased as long as there's oil in the water," Coast Guard Adm. Thad Allen said on CNN's "State of the Union" Sunday.

Allen was responding to remarks over the weekend by BP's senior vice president, Bob Fryar, who said the company was "pleased" with its operation to funnel crude up from the ruptured undersea well to a drilling ship a mile above on the Gulf of Mexico.

Fryar said the company funneled about 250,000 gallons of oil on Friday from a containment cap installed on the well to a drilling ship on the ocean surface.

On Saturday, BP had increased the amount of oil it was funneling to about 441,000 gallons to the surface. Federal authorities estimate that 798,000 gallons of crude are gushing into the sea every day.

Allen confirmed that BP has been able to bring oil to the surface after placing the cap, but said no one should be pleased until a relief well is completed and the leaking stops.

"This is an insidious enemy," Allen said. "It's attacking all of our shores, it's holding the gulf hostage, basically."