(CNN) - Scott Brown won't be jumping into the Massachusetts special election for a U.S. Senate seat.

But he did declare his interest Friday in a different race.
END_OF_DOCUMENT_TOKEN_TO_BE_REPLACED

(CNN) - Treasury Secretary Timothy Geithner said Wednesday the Obama White House is prepared for the tax increases and spending cuts ahead in the new year should the negotiations with congressional Republicans not move from the current stalemate.

"Oh, absolutely," he said in an interview with CNBC, when asked if the administration was prepared to go over the cliff.
END_OF_DOCUMENT_TOKEN_TO_BE_REPLACED

Geithner: No deal 'without rates going up'

Washington (CNN) – Treasury Secretary Timothy Geithner drew a line in the sand over taxes in defense of the Obama administration’s controversial proposal to avoid the fiscal cliff.

In an interview with CNN’s Candy Crowley on "State of the Union," Geithner insisted that any compromise on the plan he presented to congressional Republicans on Thursday, which includes $1.6 trillion dollars in tax revenue, cuts to Medicare, and another $50 billion in stimulus spending, must contain an expiration of the Bush tax cuts for income over $250,000.
END_OF_DOCUMENT_TOKEN_TO_BE_REPLACED 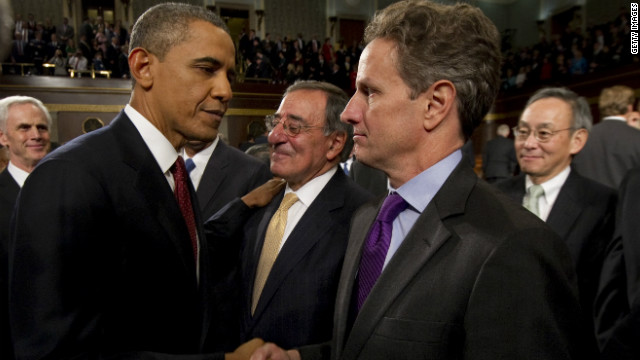 CNN caught up with Geithner at an Intel Corp. manufacturing plant in Chandler, Arizona Tuesday. Geithner’s location alone is significant: Arizona is key to the president’s reelection efforts – a swing state with 10 electoral votes where Obama garnered a respectable 45 percent of the vote in 2008 despite the fact that Arizona’s own John McCain was on the opposing ticket.

An embattled member of the president's own party has publicly called for the resignation of the top member of the administration's economic team.

Rep. Tom Perriello, a Virginia Democrat, called for the resignation of Treasury Secretary Timothy Geithner at a town hall meeting in Ruckersville, VA earlier this month, according to Perriello spokesperson Jessica Barba.

Perriello's move is emblematic of how–with the economy the biggest issue with voters–Perriello felt it necessary to distance himself from Obama economic policies.

END_OF_DOCUMENT_TOKEN_TO_BE_REPLACED

State of the Union: Candy Crowley's Crib Sheet for July 25

The Glass Is Either Half-Full or Really Empty

Treasury Secretary Tim Geithner says he’s talked to businesses and the consensus is the economy is “gradually getting better”.

“This economy is getting weak” says Obama supporter and U.S. News and World Report owner Mort Zuckerman who ticks off consumer spending -flat or down, housing -“off the edge of the cliff,” and unemployment, well even the administration now says the jobless rate will stay above 9 percent until 2012.

“There are very serious headwinds in the face of this economy,” says Republican Steve Forbes, CEO of Forbes, Inc.. He explained that businesses aren’t hiring because they are uncertain about the cost of health care, financial reform and taxes.

So, Just To End That Uncertainty on Taxes
Geithner re-confirmed his previous confirmation that the Administration wants to let the Bush tax cuts for the wealthy expire in January, leaving them in place for the middle-class, usually defined by The White House as households making 250-thousand dollars or less.
END_OF_DOCUMENT_TOKEN_TO_BE_REPLACED

Washington (CNN) - The Obama administration will push for letting tax cuts for wealthy Americans expire while extending them for the rest of the nation, Treasury Secretary Tim Geithner said.

In interviews broadcast Sunday on ABC and NBC, Geithner called for a balanced approach as the economy recovers from the recession that started in 2008 while facing mounting federal debt.

That means pushing for measures designed to raise revenue, such as letting tax breaks from the Bush administration expire for families earning more than $250,000 a year while holding down spending and taking steps to encourage private sector job creation, Geithner said.

"We're in a transition ... from the extraordinary actions the government had to take to break the back of this financial crisis to a recovery led by private demand," Geithner told the NBC program "Meet the Press". "That transition is well under way. It's going to continue and it's going to strengthen."

Along with letting the tax cuts for the wealthy expire, the administration also wants to "leave in place tax cuts that are very important to incent businesses to hire new employees and to invest and expand in output," Geithner said on the ABC program "This Week."

Republicans say letting tax cuts expire for wealther Americans will hurt economic growth as the nation recovers from the recession. In particular, GOP critics say the $250,000-a-year threshold means many small business owners would be included in the group seeing their tax burdens increase when the cuts expire at the end of 2010.

(CNN) - In this clip from CNN's Fareed Zakari GPS, another member of the Obama administration shows off some serious basketball skills.

US, China begin talks with several thorny issues on the table

Both sides agreed that the Strategic and Economic Dialogue is meant to come up with "win-win solutions, rather than zero-sum rivalries," as Clinton put it at the opening of the talks.

But it is unclear how much progress the two countries will make on thornier issues, of which there is no shortage.

In her opening day remarks, Clinton praised China for supporting tough United Nations sanctions against Iran and said the same level of cooperation was needed against North Korea.