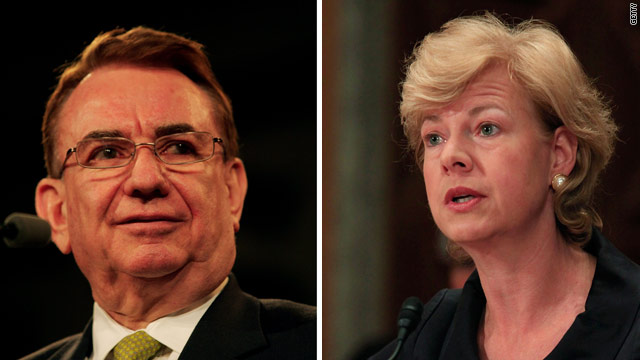 Thompson, a Republican, has 49% support in a matchup against Baldwin, a Democrat who scored 41% in the Marquette University poll of likely voters released Wednesday.
END_OF_DOCUMENT_TOKEN_TO_BE_REPLACED 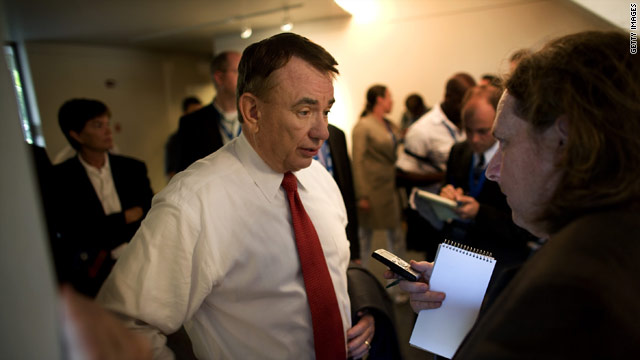 END_OF_DOCUMENT_TOKEN_TO_BE_REPLACED

"My family didn't want me to run," Thompson told the Milwaukee Journal Sentinel Thursday about his decision not run. The onetime presidential candidate announced his decision at a Tea Party rally outside the Wisconsin State Capitol.

"It's time for new voices and new faces," Thompson told the crowd, according to local television station WBAY.

END_OF_DOCUMENT_TOKEN_TO_BE_REPLACED

Iowa: Do or die 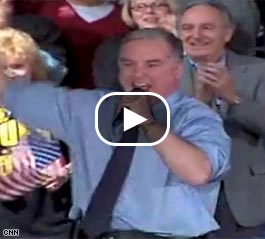 Watch Bill Schneider's report on the expectations game in Iowa.

WASHINGTON (CNN) - Remember the "Dean scream?" Bil Schneider takes a look at who Iowa may undo in the 2008 presidential race.

Huckabee, second from left, plays with his band, Capital Offense as an Elvis impersonator from Duncan Hunter's campaign helps out with a rendition of Johnny-Be-Good Saturday.

WASHINGTON (CNN) - In the battle for the republican nomination - Mitt Romney did what he was expected to do - -win this weekend's straw poll in Ames, Iowa. But the guy who came in second could be the real success story. And that guy is Mike Huckabee.

The former Arkansas governor is not a household name. He even admits it. "I know I'm relatively unknown to the national scene,” says Huckabee.

Huckabee’s also not your typical politician. He’s an ordained Baptist minister who plays guitar in a rock and roll band. He performed for his supporters Saturday at Ames. And now, thanks to a strong second place finish at the Iowa Republican presidential straw poll - he's getting some attention.

Huckabee opposes abortion rights - and he's against legalizing gay marriage. That could play well with social conservatives who may have problems with Republican candidates much higher up in the polls. "When people say we're just dissatisfied with the field that may be the top of the field but now they're beginning to realize there's another candidate out there and they don't have to keep waiting on Fred Thompson to get in the race,” says Huckabee.

“It was a big win for Huckabee in Iowa, because his polling numbers have consistently been in the low single digits in most national and state surveys,” says CNN Political Editor Mark Preston. “To prove that Saturday's strong showing wasn't a fluke, Huckabee must now show he can raise the millions of dollars needed to be a top flight candidate."

END_OF_DOCUMENT_TOKEN_TO_BE_REPLACED

Watch Thompson explain why he is dropping his White House bid.

DES MOINES, Iowa (CNN) - Former Wisconsin Gov. Tommy Thompson abandoned his long shot bid for the White House late Sunday evening, after he did not meet the expectations he set for himself in the Iowa Republican Party straw poll held one day before.

"I want to thank the people of Iowa who were welcoming and supportive as well as my volunteers and contributors from around the country," Thompson said in a statement released by his presidential campaign. "I have no regrets about running. I felt my record as Governor of Wisconsin and Secretary of Health and Human Services gave me the experience I needed to serve as President, but I respect the decision of the voters."

Thompson, who served in President Bush's cabinet in the first term, came in sixth out of 11 candidates listed on the ballot of the state GOP sanctioned straw poll held in Ames. (See full results below) Since entering the race, Thompson focused a large part of his message on reforming the nation's healthcare system. But his campaign never caught fire.

END_OF_DOCUMENT_TOKEN_TO_BE_REPLACED

DES MOINES, Iowa (CNN)- The Ames straw poll is over. The candidates are leaving town, some with ribbons of victory and others with tough decisions to make about whether to continue their presidential campaigns.

We’re about to depart Iowa, but before we do we thought we’d take a look at which candidates may not be candidates much longer.

The straw poll in Ames serves a very important purpose. It traditionally helps narrow the field of GOP presidential hopefuls and yesterday’s contest is expected to be no exception.

So, here are some observations of what could happen.

Perhaps the candidate most wounded by last night’s vote is former Wisconsin Gov. and Bush cabinet secretary Tommy Thompson. He did not meet the expectations that he set for himself leading up to the poll. Thompson made it clear that Iowa was the key to his campaign. He came in sixth in the straw poll with only 7.3 percent of the vote. No word yet on whether he’ll abandon his quest for the White House.

While Sen. Sam Brownback finished in the top three, he was greatly overshadowed by former Arkansas Gov. Mike Huckabee’s surprise second place finish. The Kansas Republican spent a great deal of money on the straw poll and will likely consider leaving the campaign trail to return full time to the Senate.

Even though California Rep. Duncan Hunter finished behind two opponents who did not even participate in the straw poll, there is no chance he is leaving the race anytime soon.

"This is just a start for us, because this is the first real week we have done in Iowa," Hunter said in an interview with CNN prior to the results being reported. “We look at this as a good start."

As for the winners, Huckabee will use the victory to try and raise money for his reinvigorated campaign and the big winner, former Massachusetts Gov. Mitt Romney, will seek to use the straw poll to continue to build his massive Iowa operation and as a springboard to greater national recognition.

AMES, Iowa (CNN)- Voting is underway in the first crucial Republican straw poll contest of the 2008 presidential campaign season. The first ballots were cast at 10am CT here on the campus of Iowa State University in Ames. Voting will last until 6pm local time and results will be announced one hour later.

Voters need to prove they are Iowa residents and need to pay a $35 entrance fee. Many of the campaigns are busing in their supporters and paying for their entrance fees. But the ballots are cast in secret so there is no guarantee on how people will vote, even if they are bused in and their entrance fees paid for by certain campaigns.

After they cast their ballots, voters need to dip their thumbs in indelible ink, similar to the kind used in the Iraqi national elections. This is supposed to prevent people from voting more than once.

Mitt Romney is expected to win today’s straw poll. The big question right now is by how much the former Massachusetts Governor will win. The top three GOP contenders in the national polls, former New York City Mayor Rudy Giuliani, former Senator from Tennessee Fred Thompson, who’s yet to announce he’s running for President, and Senator from Arizona John McCain, are not actively taking part in today’s straw poll.

The other big question today is which of the second tier candidates will come in second. Former Arkansas Governor Mike Huckabee, Senator from Kansas Sam Brownback, and former Wisconsin Governor and Bush Cabinet Secretary Tommy Thompson are all gunning hard for capturing second place. Congressmen Duncan Hunter and Ron Paul and Tom Tancredo are also here today and hoping for a strong finish.

There’s the possibility that some of these second and third tier candidates may drop out of the race for the White House if they don’t perform well in today’s straw poll.

WASHINGTON (CNN) - Tommy Thompson’s campaign manager says the former Wisconsin governor must finish first or second in this weekend’s Ames Straw Poll for him to remain in the presidential race.

Thompson’s national campaign manager Steve Grubbs sent an e-mail to supporters on Wednesday pleading with Iowans to attend the annual straw poll on Saturday and vote for Thompson.

According to the e-mail, Thompson will drop out of the race unless he comes close to winning.

“If you're a SOTT (Supporter of Tommy Thompson), then this is probably the most important e-mail you have ever received from his campaign,” Grubbs wrote. “Without your help and support this week, Tommy Thompson's campaign cannot go on. Tommy Thompson has made it clear that if he doesn't finish first or second this week in Ames, Iowa at the straw poll, he will not go on in this race.”

Thompson has struggled to gain traction since announcing his presidential exploratory committee last year. He is registering in low single digits according to recent polls.