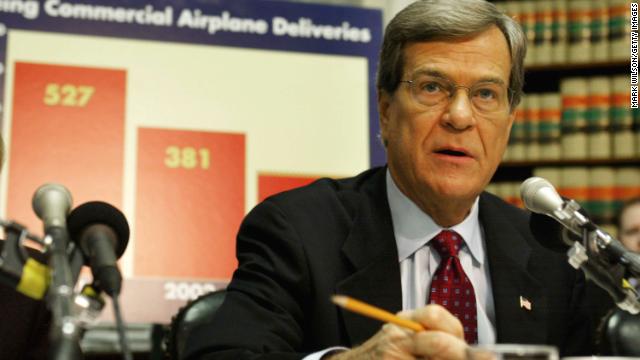 Washington (CNN) – Former Senate Majority Leader Trent Lott’s message to current Leader Harry Reid could be boiled down to this: I know how you feel, but trust me, you are going to regret this.

Lott watched Thursday as Senate Democrats invoked the “nuclear option” by voting to change filibuster rules and made it easier for them to approve President Barack Obama’s judicial appointments that Republicans have blocked.
END_OF_DOCUMENT_TOKEN_TO_BE_REPLACED

Washington (CNN) - Secret conversations on the balcony. A special phone line for instant and direct communication. These are some of the tools former Democratic leader Tom Daschle and former Republican leader Trent Lott used to forge bipartisan consensus and compromise when they ran the Senate a little more than a decade ago.

In a joint interview in the shadow of the Capitol, Daschle and Lott reminisced about bridging partisan differences to get things done - instructive for today's leaders talking past each other as the fiscal cliff approaches.

For Obama: OK, what now?

Washington (CNN) - When Republican Trent Lott sat down for lunch with Democrat Tom Daschle on Monday afternoon, mere hours before voters shellacked President Obama and his party in the midterm elections, it was more than just two former Senate gladiators getting together to reminisce about old times

Despite their many differences over the years, Lott and Daschle managed to find a way to work together during the bruising days of the Clinton and Bush administrations, where everything from impeachment to Iraq caused deep divisions between the parties.

[cnn-photo-caption image= http://i2.cdn.turner.com/cnn/2010/images/09/12/art.armey.lott.sotu2.cnn.jpg caption =" Dick Armey and Trent Lott spoke Sunday with CNN’s Candy Crowley on State of the Union."](CNN) - Former Republican House Majority Leader Dick Armey, a leading voice in the Tea Party movement, said Sunday he disagreed with a leading conservative Republican's assessment of how establishment politicians in the Republican Party should regard Tea Party candidates if they're elected to serve in Washington.

Former Republican Senate Majority Leader Trent Lott, a strong voice for conservatives, told the Washington Post in July "as soon as they [Tea Party candidates] get here, we need to co-opt them."

Armey told CNN's Candy Crowley on "State of the Union" that he felt Lott used "a bad choice of words."

"You were talking about a group of people whose necks stiffen immediately upon hearing that word," Armey said. "These are independent-minded people, they really have no particular appreciation for the performance of either party in the past several years. They want to run for office in order to change that."