Washington (CNN) - Most Americans don't agree with Karl Rove's questioning of Hillary Clinton's health and age, according to a new national poll.

And an ABC News/Washington Post survey released Wednesday also indicates that a majority of the public says they'd support Clinton if she makes a second bid for the White House.

END_OF_DOCUMENT_TOKEN_TO_BE_REPLACED

"More subtle" forms of racism that "cut deeper" cause the real harm, he argued Saturday.

In a commencement speech at Morgan State University, a historically black college in Baltimore, Holder used the 60th anniversary of the Brown v. Board of Education ruling that desegregated schools to highlight inequalities that persist today.

END_OF_DOCUMENT_TOKEN_TO_BE_REPLACED

(CNN) - Keith Crisco, a businessman who was locked in a close primary race for a Democratic congressional seat in North Carolina with Clay Aiken, died on Monday.

He died at home in Asheboro around 1 p.m., according to the North Carolina Democratic Party. Other details were not immediately clear. He was 71.

END_OF_DOCUMENT_TOKEN_TO_BE_REPLACED

Political Chatter: All eyes on Putin, Clinton and Shinseki

(CNN) - Russian President Vladimir Putin traveled to Crimea Friday in what many journalists and policymakers in Washington have dubbed a “victory lap” for the thrice-elected Soviet leader. But should the United States be doing more to sanction Putin for his aggression in the region?

On the eve of Ukraine’s election, journalists on Sunday focused whether the current steps taken by the White House are working to weaken Russia’s aggression in the region and what Putin’s march into Crimea could signify about what is next for Ukraine.

Washington influencers also discussed hot topics such as the Nigerian kidnappings, a reignited Benghazi debate on Capitol Hill, Monica Lewinsky’s new essay after 10 years of silence, and the bureaucratic backlog scandal that has many calling for the Veterans Affairs secretary to resign.

If you missed the Sunday political talk shows, we’ll get you up to speed on the latest events and opinion in Washington with this comprehensive roundup of all things political:

END_OF_DOCUMENT_TOKEN_TO_BE_REPLACED

Her new book, "James Madison: A Life Reconsidered" is a labor of political admiration that began five years ago and culminated in a historical journey in which Madison, the father of the Constitution, also becomes a prophet of productive conservatism.

She considers his impact generally under-appreciated but incredibly profound. 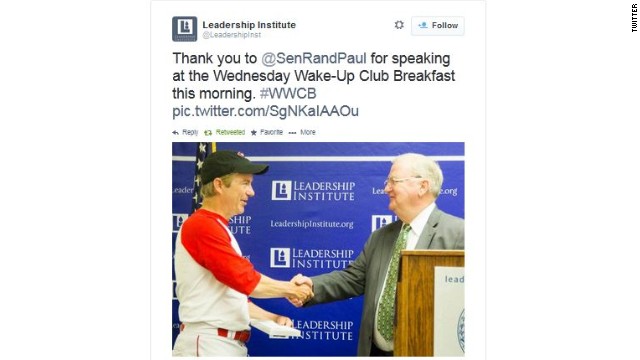 That time Rand Paul wore a baseball uniform to a speech

The Kentucky Republican delivered a speech Wednesday morning while wearing a baseball uniform–white pants and all.
END_OF_DOCUMENT_TOKEN_TO_BE_REPLACED

Posted by
By Melodi Smith

(CNN) - A night out to dinner became a night of rescue for the governor of Oregon.

Gov. John Kitzhaber, a former emergency room doctor, was on the way to dinner Monday evening and noticed a woman in need of help in downtown Portland.

Kitzhaber ordered his driver to stop and performed CPR on the unconscious woman, according to CNN Affiliate KOIN.

END_OF_DOCUMENT_TOKEN_TO_BE_REPLACED

Judge Lynn Adelman in Milwaukee ruled the requirement that voters present one of nine forms of government-approved photo ID was in violation of the landmark Voting Rights Act. He issued an injunction blocking enforcement of the law. A state judge had earlier tossed out the law on similar legal grounds.
END_OF_DOCUMENT_TOKEN_TO_BE_REPLACED

(CNN) – Former Secretary of State Hillary Clinton used remarks at a women's leadership conference in Boston to urge more female participation and, in a new comment for the former first lady, pushed to end age discrimination of women.

The push from Clinton, which came largely unprovoked and in the last question of the Wednesday event, is especially interesting considering a chorus of Republicans who are charging that Clinton will be too old to run for president in 2016.
END_OF_DOCUMENT_TOKEN_TO_BE_REPLACED