Potential VPs to hit the trail with Romney

(CNN) – Mitt Romney will be joined by a trio of potential vice presidential picks on his upcoming bus tour through four battleground states, sources confirmed to CNN Monday.

The naming of the three women most likely means that Romney's campaign is no longer vetting their backgrounds, if they ever did.
END_OF_DOCUMENT_TOKEN_TO_BE_REPLACED

The slew of high-profile surrogates covered the country over the weekend hounding President Barack Obama for what they say is a failed economic and foreign policy, all the while singing Romney’s praise.
END_OF_DOCUMENT_TOKEN_TO_BE_REPLACED

Ann Romney on VP pick: 'We're not quite there yet'

Romney noted the heavy speculation but said "we're not quite there yet" in an interview with ABC's "Good Morning America" set to air Thursday, according to ABC News.
END_OF_DOCUMENT_TOKEN_TO_BE_REPLACED

(CNN) – Condoleezza Rice has indicated she is firm in her opposition to joining Mitt Romney's ticket as vice president but that hasn't stopped the speculation that she might be the one.

(CNN) – Sen. Kelly Ayotte, the New Hampshire lawmaker sometimes mentioned as a potential running mate for Mitt Romney, will march in a July 4th parade alongside the presumptive GOP nominee in her home state Wednesday, a Republican source confirmed Tuesday.

Ayotte and Romney will march down Main Street in Wolfeboro, New Hampshire, where Romney has been spending some time away from the campaign trail at his lakeside vacation home.
END_OF_DOCUMENT_TOKEN_TO_BE_REPLACED

Christie would 'answer the call' on becoming veep

(CNN) – New Jersey Gov. Chris Christie, while not saying he would definitely accept a spot on Mitt Romney's Republican presidential ticket, did say Tuesday he would give such an offer due consideration.

"I love being governor of New Jersey, you can tell. I think every day the way I do my job I love it. But the fact is, if Gov. Romney picks up the phone and calls, you have to answer the call and listen at least," Christie said on CNBC.
END_OF_DOCUMENT_TOKEN_TO_BE_REPLACED

Bachmann on VP spot: 'Not for me to make that decision'

(CNN) – Former presidential candidate Michele Bachmann did not deny Monday whether she was being vetted for the job of Mitt Romney's running mate.

"Whoever it is that he chooses to bring in as his V.P., it will be a highly competent person who could step in at a moment's notice and assume the responsibilities of the White House," the Minnesota congresswoman said on CNN's "Piers Morgan Tonight."
END_OF_DOCUMENT_TOKEN_TO_BE_REPLACED 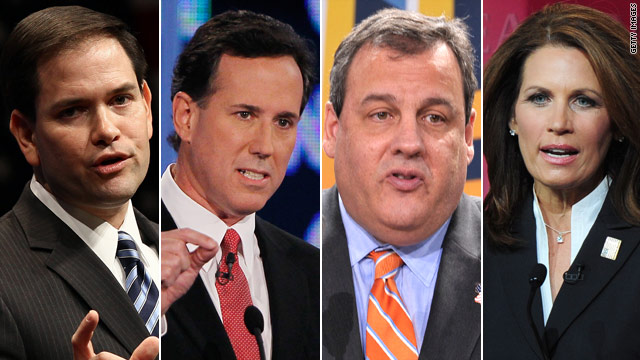 Washington (CNN) – Florida Sen. Marco Rubio, GOP presidential candidate Rick Santorum, and New Jersey Gov. Chris Christie are the names that come up the most when Republicans are asked who they would like to see as their party's vice presidential nominee, according to a new survey.

Rubio is mentioned 66 times in a study conducted by Fairleigh Dickenson University's PublicMind poll. Santorum, the former senator from Pennsylvania who in the past week and a half has surged to front-runner status in the race for the GOP nomination, is mentioned as the running mate 56 times, with Christie grabbing 47 mentions.

CNN LIVE: Tune in Wednesday at 8 p.m. ET for the final presidential debate before Super Tuesday: The CNN Arizona Republican Debate. Only on CNN. Follow it on Twitter at #CNNDebate.
END_OF_DOCUMENT_TOKEN_TO_BE_REPLACED

A look inside the veep vetting process 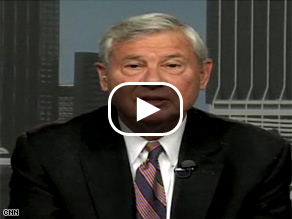 Watch a clip from Graham's interview Thursday on American Morning.

“Well, the process is very intense,” Graham told CNN’s Carol Costello on American Morning Friday. “Typically they will have a lawyer, accountant, a political operative, and a private detective reviewing your background for every issue that might arise.”

There’s more. “You are interviewed on several occasions,” said Graham. “If you make it to the short ‘short list’ you get interviewed by the nominee.”

Graham also told Costello that he didn’t think a detailed list he keeps of daily to-do tasks had anything to do with being overlooked for the vice presidential nomination.