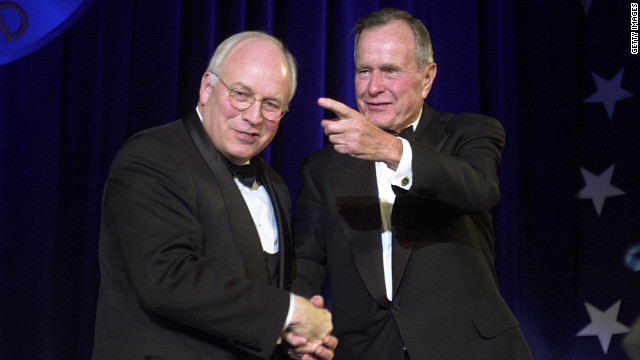 In White House tradition, Cheney signs off on press corps

In keeping with a long-standing tradition of the White House press corps, Vice President Cheney signed the wall in the basement that lies beneath the White House briefing room. The basement was once a swimming pool that was built for President Franklin Roosevelt, and years later was covered over to make room for the press.

The tile sides of that pool remain as part of the walls of the basement and has been signed by many members of the press, celebrities who visit the White House, and of course, members of the administration. Famous signatures include Bono, Sugar Ray Leonard, and First Lady Laura Bush.

Vice President Cheney quietly came into the briefing room Sunday morning with two members of his Secret Service detail. He signed his name next to that of his wife Lynn Cheney, who had previously autographed the famous swimming pool walls.

[cnn-photo-caption image=http://i2.cdn.turner.com/cnn/2009/images/01/11/art.cheneyexclusive.cnn.jpg caption="Vice President Dick Cheney defends his administration's handling of the nation's financial crisis."]
WASHINGTON (CNN) - Appearing Sunday on the last broadcast of CNN's Late Edition, Vice President Dick Cheney defended the administration's handling of the recession and argued that its premature to call it the worst economic crisis since the Great Depression.

"I can't say that. I don't think we know that yet. I think certainly if you look at some earlier periods in our history, I remember back in the late '70s when we had a high rate of inflation, stagflation in effect and a high rate of unemployment," Cheney said.

He added, "We've had some difficult times. Is it the worst since World War II? I can't say that. I don't believe the data shows that yet but it is clearly a serious recession."

The vice president also defended the administration against criticism that it has backtracked on its principles by providing hundreds of billions of dollars to the private sector after previously lambasting the involvement of 'big government' in the economy.

"When the financial system is threatened, only the federal government can fix it and that's what we've been doing," he said. "So even though I'm a conservative, I feel very strongly that we did the right thing by getting active and involved when we did."

END_OF_DOCUMENT_TOKEN_TO_BE_REPLACED

In an interview with "Fox News Sunday," Cheney was asked if he had any second thoughts or embarrassment. "No. I thought he merited it at the time," Cheney said, laughing.

The incident occurred in June 2004 when both Cheney and Leahy were on the Senate floor.

Sources who related the incident to CNN at the time said the vice president had told Leahy to either "f- off" or "go f- yourself."

Read more on the incident

The encounter during the 2004 presidential campaign, sources said then, was brought on by Leahy's criticism of the vice president over Halliburton Co. Cheney is the former chief executive officer of the oil field services company, and Democrats had suggested he helped win lucrative contracts for his former firm while serving in the Bush administration.

"It was partly that, it was partly also ... it had to do with - he is the kind of individual who will make those kinds of charges and then come act as though he's your best friend, and I expressed in no uncertain terms my views of his conduct and walked away," Cheney said at the time.

But as the old saying goes, time heals all wounds ... well, sort of.

"And we've since, I think, patched over that wound and we're civil to one another now," Cheney said this Sunday.

WASHINGTON (CNN) - A federal appeals court in Washington has rebuffed an attempt by former CIA operative Valerie Plame Wilson to sue top administration officials for the public disclosure of her intelligence job.

An attorney for Wilson and her husband, former Ambassador Joe Wilson, said an appeal is likely.

"Because the Wilsons have failed to state constitutional ... claims for which relief may be granted and failed to exhaust their administrative remedies as required ... we affirm the judgment of the district court dismissing the Wilsons' amended complaint in its entirety," the court said.

END_OF_DOCUMENT_TOKEN_TO_BE_REPLACED

[cnn-photo-caption image= http://i.l.cnn.net/cnn/2008/images/01/23/art.cepd.cnn.jpg caption="CNN=Politics Daily is The Best Political Podcast from The Best Political Team."]
(CNN) - In the latest installment of CNN=Politics Daily, Pulitzer prize-winning author Ron Suskind claims that the White House went to disturbing lengths to justify the War on Terrorism. CNN’s Brian Todd reports on the accusations within the author’s controversial new book.

Will Dick Cheney attend the Republican National Convention in Minnesota? CNN’s Senior Political Analyst Bill Schneider takes a look at the GOP’s recent snub of the VP and how McCain’s camp factors into his attendance of the event.

Plus: Presumptive Democratic presidential nominee Barack Obama is confronted with the age limit question during a townhall debate. CNN’s Jessica Yellin reports on how the Illinois senator navigated around this “tricky question.”

Finally: Presumptive presidential nominees John McCain and Barack Obama have sharp policy differences on how to deal with the nation’s growing energy crisis—Including their positions on nuclear power. CNN White House Correspondent Ed Henry has the latest on the candidates’ recent attacks on their opponent’s energy policies while on the campaign trail.

Asked during a question-and-answer session at the National Press Club about the fact that a search of his family tree found he is a distant relative of Sen. Barack Obama, the Democratic presidential front-runner, Cheney said the two politicians were unlikely to hold a family reunion.

"So, I had Cheneys on both sides of the family - and we don't even live in West Virginia," Cheney cracked. After pausing for laughter from the crowd, Cheney added, "You can say those things when you're not running for re-election."

Afterward, West Virginia Sen. Robert Byrd lashed out at Cheney for the "insult to all Americans." In a written statement, Byrd declared that Cheney showed "contempt and astounding ignorance toward his own countrymen" with the comments.

END_OF_DOCUMENT_TOKEN_TO_BE_REPLACED

The visit to Afghanistan - which a U.S. Embassy source says will be "very brief" - is Cheney's latest stop in his trip overseas, which began Sunday. He visited Iraq earlier this week.