Biden: Romney's Wall Street will 'put y'all back in chains'

"(Romney) is going to let the big banks once again write their own rules, unchain Wall Street," Biden said at a campaign event in Danville, Virginia. "He is going to put y'all back in chains."
END_OF_DOCUMENT_TOKEN_TO_BE_REPLACED

Perhaps he should share some of his stock picks with Uncle Sam in order to boost revenue as well.

Romney: GOP has 'misspoken' on regulation

(CNN) - Speaking on foreign turf, Mitt Romney offered some criticism of his own party on Thursday, saying the GOP sometimes uses the wrong phrasing when it comes to regulation reform.

"We have in our party, I think, on occasion misspoken by just saying we're for deregulation–to some that means we want to get rid of all regulation. That's not true," Romney said at a fundraiser in London, according to pool reports.
END_OF_DOCUMENT_TOKEN_TO_BE_REPLACED

Washington (CNN) - It was a rare show of bipartisanship - President Barack Obama, flanked by Democrats and Republicans in April, signing into law a bill that would ban insider trading on Capitol Hill. The measure, known as the STOCK Act, had passed the House and Senate in warp speed.

NEW YORK (CNNMoney) - Hell hath no fury like a woman scorned - but what about a Wall Street titan?

Deep-pocketed financiers have abandoned President Obama and are flocking to Mitt Romney in droves, providing more donations to his campaign than any other industry except retired workers. (And that's not really an industry.)

Warren's comments came after she called on JPMorgan Chase boss Jamie Dimon to step down as a director of the New York Federal Reserve board after his firm announced a $2 billion loss since the start of April.
END_OF_DOCUMENT_TOKEN_TO_BE_REPLACED 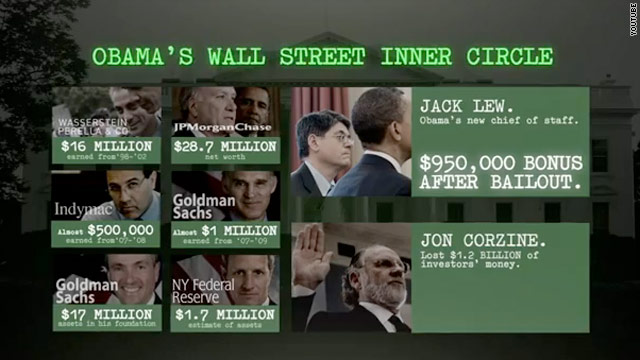 American Future Fund, which previously hit Obama for his ties to bankrupt solar energy firm Solyndra and the spending scandal at the General Services Administration, goes after the president in the new spot for claiming to be a Wall Street reformer while taking massive contributions from financial sector employees.
END_OF_DOCUMENT_TOKEN_TO_BE_REPLACED

Washington (CNN) - JPMorgan Chase announced last week that it lost $2 billion as the result of some complicated hedge fund trading, which according to its top executive is apparently not as bad as it sounds.

"This is a stupid thing we should never have done, but we are still going to earn a lot of money this quarter. It's not like this company is jeopardized - we hurt ourselves and our credibility, yes, and we've got to fully expect that and pay the price for that," CEO Jamie Dimon said on NBC's "Meet the Press" on Sunday. 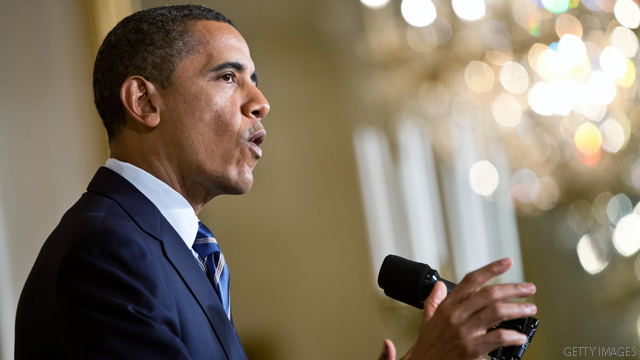 But there won't be any cheering in the boardrooms and hallways of the Securities and Exchange Commission and the Commodity Futures Trading Commission.

Washington (CNNMoney) - Wall Street has thrown its weight behind alum Mitt Romney for president, according to new campaign data for 2011.

But the industry hasn't totally abandoned President Obama, who in 2008 raised more money from the financial industry than any other candidate in history, according to two watchdog groups.