Washington (CNN) – President Barack Obama talked about his own family's struggle to balance work and family life at Monday's White House Summit on Working Families, calling on Congress to act to make finding that balance easier.

“Before I moved into the White House, I was away a lot, sometimes with work, sometimes with campaigning. Michelle was working full-time and was at home with the responsibility all too often of dealing with everything that the girls needed,” the President said.

END_OF_DOCUMENT_TOKEN_TO_BE_REPLACED

(CNN) – Invoking the heated racial controversy triggered by basketball’s Donald Sterling, the U.S. Senate has stepped up pressure on the NFL to force the Washington Redskins to change their name.

Fifty senators, all Democrats, have signed a letter released on Thursday by Majority Leader Harry Reid that urges pro football’s commissioner, Roger Goodell, to take action over concerns that continued use of the Redskins brand is offensive to Native Americans.

END_OF_DOCUMENT_TOKEN_TO_BE_REPLACED

Obama greets Little League baseball players as they warm up prior to games at Friendship Park in Washington on May 19, 2014. AFP PHOTO/Nicholas KAMM
May 19th, 2014
06:50 PM ET

President Barack Obama made a surprise stop Monday at a Little League baseball field in D.C. to greet players before their game.

END_OF_DOCUMENT_TOKEN_TO_BE_REPLACED 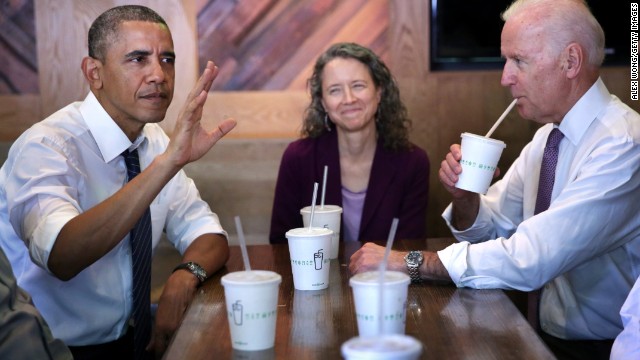 Washington (CNN) – President Obama met up with his vice president for lunch Friday at a Shake Shack location not far from the White House.

But more than burgers were on the President's mind.
END_OF_DOCUMENT_TOKEN_TO_BE_REPLACED

END_OF_DOCUMENT_TOKEN_TO_BE_REPLACED

As voters head to the polls on Tuesday, Bowser has become the most likely challenger to unseat Gray, who a majority of voters believe knew of an illegal shadow campaign that helped him win the mayor's office in 2010.
END_OF_DOCUMENT_TOKEN_TO_BE_REPLACED

In an interview with CNN, Gray again denied any wrongdoing following the biggest guilty plea so far in the federal probe of a nearly $700,000 unlawful "shadow campaign" that was part of his successful 2010 mayoral run. END_OF_DOCUMENT_TOKEN_TO_BE_REPLACED

Washington (CNN) – The District of Columbia Council voted to significantly ease marijuana laws in the nation’s capital on Tuesday.

By a near unanimous vote, the council decided to lessen penalties for public and private consumption of marijuana and decriminalize the possession of small quantities of the drug.

END_OF_DOCUMENT_TOKEN_TO_BE_REPLACED

Washington (CNN) - It appears the controversies New Jersey Gov. Chris Christie's dealing with back in the Garden State haven't affected his standing as one of the GOP's most potent fundraising rainmakers.

As Christie convenes two days of Republican Governors Association meetings here in the nation's capital Friday and Saturday, an RGA official tells CNN that the group has raised $18 million since Christie took over as RGA chairman in late November. That's a new fundraising record for the first three months of a new RGA chairman's tenure. The previous record holder was then-Mississippi Gov. Haley Barber, who chaired the RGA from June 2009 through the end of 2010.
END_OF_DOCUMENT_TOKEN_TO_BE_REPLACED

(CNN) - Two lawmakers have joined the debate over the name of the Washington Redskins football team, writing a letter to the National Football League calling for a name change and threatening to hold hearings on the subject.

The name Redskins is "an insult to Native Americans," according to the two lawmakers, Sen. Maria Cantwell, D-Washington state and chairwoman of the Indian Affairs Committee, and Rep. Tom Cole, R-Oklahoma, who is a member of the Chickasaw Nation.