Israel said Thursday it will build 675 new settlement homes on the West Bank. The housing units are part of an old agreement and not a new plan, Prime minister spokesman Mark Regev has said. The expansion of Jewish settlements on the West Bank have been a lasting thorn in the side of Palestinians.

At least 93,000 people had been killed in Syria's conflict by the end of April this year, but the true number is "potentially much higher", the United Nations  human rights office said on Thursday. An average of more than 5,000 people have been killed every  month since last July, while Rural Damascus and Aleppo have  recorded the highest tolls since November, it said in its latest  study compiling documented deaths.

END_OF_DOCUMENT_TOKEN_TO_BE_REPLACED 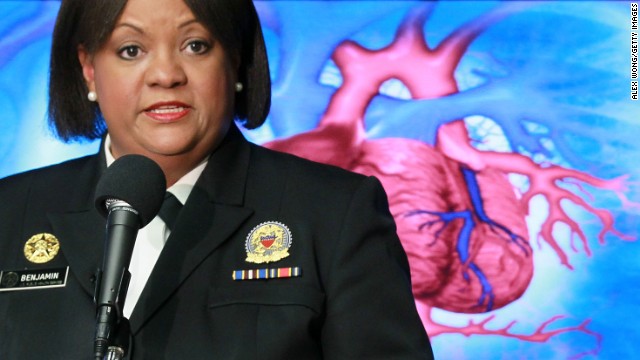 Washington (CNN) - U.S. Surgeon General Regina Benjamin announced late Wednesday that she will step down next month after four years in the post.

Benjamin, a longtime advocate for a health care model centered on wellness and preventable treatment, announced her decision in an e-mail to staff, thanking them for supporting her vision.

"My goal was to create a grassroots movement, to change our health care system from one focused on sickness and disease to a system focused on wellness and prevention. With your help, that movement has begun," Benjamin wrote.

Turkish riot police in sizable numbers moved into Taksim Square on Tuesday morning, where they engaged in a game of cat-and-mouse with a small, hard-core group of protesters. The protesters lobbed Molotov cocktails at armored vehicles and burned one. Police responded by spraying water cannons. The demonstrators, using wooden boards as shields, would pull back - only to return again, lobbing cocktails and firecrackers and flashing "victory" signs. Smoke from tear gas and fireworks wafted through the air as the armored vehicles shoved away makeshift barriers set up by the demonstrators.

END_OF_DOCUMENT_TOKEN_TO_BE_REPLACED

Seniors in almost every state in the country are falling short when it comes to affording their golden years, according to a study released Monday. Nationwide, seniors are living off of a median household income of $35,107, roughly 57% of the median income of their younger counterparts ages 45 to 64, according to an analysis of 2011 U.S. Census Bureau data by Interest.com, a financial information website owned by Bankrate.com. "We found that many senior citizens are significantly underfunded and risk running out of money," said Mike Sante, the site's managing editor. Only seniors in Nevada and Hawaii have median annual incomes that meet the savings benchmark commonly recommended by financial planners.
END_OF_DOCUMENT_TOKEN_TO_BE_REPLACED

Tropical Storm Andrea is expected to drench the East Coast with heavy rains Friday as its strength weakens. A broader swath of the East Coast - including parts of 13 states, from Georgia to Maine - is under flash-flood watches. Flash flood warnings extend from Florida through coastal communities north to Virginia. The warning means a sudden deluge of rain could overwhelm sewers, and cause rivers and creeks to overrun their banks through the weekend. The watch area includes Washington, which the National Weather Service predicts could get up to 6 inches of rain Friday, and New York City, where forecasters say 1 to 2 inches of rain an hour could fall at times into Saturday.

Her family says she was brilliant, caring and had the ability to find beauty in everything. Anne Bryan was in her first year as a full-time student at the Pennsylvania Academy of the Fine Arts. She was among the six people killed Wednesday when a building collapse spilled rubble into a thrift store. Roseline Conteh, Borbor Davis, Kimberly Finnegan, Juanita Harmin and Mary Simpson also died, according to Mayor Michael Nutter. Nutter promised Thursday morning a "wide-ranging" investigation into the collapse of a four-story wall of a partially demolished building that toppled onto a Salvation Army store. For more than a dozen hours, searchers had climbed over shards of wood, concrete and rebar before calling off the search for possible survivors late Thursday afternoon. Fire Department Commissioner Lloyd Ayers said officials were "absolutely sure" there were no more victims in the huge pile of rubble. The scene will be turned over to accident investigators from the police and inspections departments and the fire marshal's office, he said.

END_OF_DOCUMENT_TOKEN_TO_BE_REPLACED

After months of unsettling tensions, North and South Korea tentatively agreed Thursday to hold talks about reopening their shared manufacturing zone where Pyongyang halted activity in April. The North proposed the meeting to discuss the shuttered Kaesong Industrial Zone - a major symbol of cooperation between the two countries - along with other issues in a statement published by state-run media. "The venue of the talks and the date for their opening can be set to the convenience of the south side," it said. The South Korean Unification Ministry responded positively, saying, "We hope the talks between the two authorities will be a great opportunity to build trust between South and North." It said the timing, agenda and other aspects of the talks would be announced later.

Syrian rebels have taken control of the only crossing between Syria and the Israeli-occupied Golan Heights, the Syrian Observatory for Human Rights said. Rebels attacked government checkpoints and battled Syrian forces in the largely abandoned city of Quneitra before gaining control of the city's border crossing, the opposition group said. A steady stream of gunfire could be seen in Quneitra from the Israeli-occupied side. Rebels opened fire on the Syrian forces, who responded with tank fire to try to force the rebels back. Mortars and small arms fire caused the bushes and shrubs to catch on fire.

END_OF_DOCUMENT_TOKEN_TO_BE_REPLACED

Tempestuous weather is striking the United States on four fronts. It seems as if Mother Nature is trying to throw much of the nation one extreme or another. Here's a roundup: An area of "disturbed weather" in the Gulf of Mexico, off the Yucatan Peninsula, could bring heavy rain and flooding to the Florida Peninsula and the Georgia and Carolina coasts by Thursday, CNN meteorologist Sean Morris said. …A 32,000-acre wildfire is burning some old-growth chaparral that lies in the western tip of the Mojave Desert in northern Los Angeles County. …The mighty Mississippi River is now at major flood stage in St. Louis, but the worst of it is over and waters will recede this week, Morris said. The river has risen to more than 10 feet above flood stage.

Inside their dark, barren home in Dagestan, Zubeidat and Anzor Tsarnaev finally hear the voice they've been longing to hear for weeks. It's the voice of their only surviving son, Dzhokhar. To the outside world, he's suspected of helping to launch a gruesome attack at the Boston Marathon that killed three people and maimed dozens more. But to the Tsarnaevs, Dzhokhar is an innocent teen who has been victimized by the American justice system. In an exclusive interview with CNN affiliate ITN, Zubeidat Tsarnaev plays a recorded phone call with her 19-year-old son. It's their first conversation since Dzhokhar Tsarnaev was shot and arrested in April.

END_OF_DOCUMENT_TOKEN_TO_BE_REPLACED

Hundreds of people were being evacuated from their homes in Missouri after a levee was breached Monday night. Officials in St. Charles County near St. Louis activated warning sirens after the levee broke, a statement from the county said. Earlier Monday, a bridge connecting West Alton, Missouri, and Alton, Illinois, was shutdown after a temporary flood barricade gave way. Forecasters say there could be major flooding Tuesday. The Mississippi River at St. Louis was 10.1 feet above flood stage Monday night, according to the U.S. Geological Survey website. Flood warnings and advisories were in effect from counties in northern Illinois down to Louisiana.

Connecticut Gov. Dannel P. Malloy is considering legislation that would let families of victims in the Sandy Hook school shooting block release of some crime-scene documents. The governor's office sent CNN a working draft of the bill. If enacted, it would require written consent of those who survived the shooting or family members of those who died for officials to release photos, video, audio recordings or 911 calls "depicting the physical condition of any victim." The bill also would allow officials to redact the identity of any minor. It would exempt the release of death certificates as public records, and would limit the release of 911 call recordings. Only transcript portions not containing descriptions of the victims would be made available.

END_OF_DOCUMENT_TOKEN_TO_BE_REPLACED

A Mexican court released an American woman detained over allegations she tried to smuggle 12 pounds of marijuana under a bus seat. Yanira Maldonado, an Arizona resident and mother of seven, had denied the charges. She was released Thursday night after the court determined that the prosecutors did not provide evidence. Her husband, Gary Maldonado, tearfully embraced his wife after she was released. They headed back to their hometown of Goodyear, Arizona, early Friday morning. The case has sparked widespread media coverage and attention from U.S. lawmakers as family members pushed for her freedom.

The father of a 27-year-old man shot dead by an FBI agent said Thursday that accounts he has heard about the killing make no sense. Ibragim Todashev was fatally shot early May 22 during questioning about a 2011 triple homicide in Waltham, Massachusetts, as well as his relationship with deceased Boston Marathon bombings suspect Tamerlan Tsarnaev. Todashev admitted to his direct role in slashing three people's throats in Waltham and said Tsarnaev was involved as well, a federal law enforcement official told CNN. It was during that interview - which took place in the kitchen of his Orlando, Florida, home - that Todashev was shot dead.

END_OF_DOCUMENT_TOKEN_TO_BE_REPLACED

Syria has already received the first shipment of an advanced Russian air defense system and will soon get the rest of the S-300 missiles, President Bashar al-Assad was quoted as saying on Thursday. "Syria has received the first shipment of Russian anti-aircraft S-300 rockets," Lebanese newspaper al-Akhbar newspaper quoted Assad as saying in an interview due to be broadcast later in the day. "The rest of the shipment will arrive soon." An interview with Assad will be released on Al Manar, a television station linked to Assad's ally, the Shi'ite Muslim militant group Hezbollah. Russia has said it would deliver the missile system to the Syrian government over Western objections, saying the move would help stabilize the regional balance.