DC residents are used to derision from chillier quarters of the country over their city’s occasional paralysis in the face of winter weather. After a few inches of snow and some early morning sleet in the first half of the week resulted in a wave of Washington-area shutdowns, the city’s most famous Midwestern transplant couldn’t resist a dig or two at his new hometown’s expense.

"My children's school was canceled today, because of what? Some ice," President Obama told a group of business leaders visiting the White House Wednesday.

"As my children pointed out, in Chicago school is never canceled," he said, adding that his daughter Sasha observed that schoolchildren there would even have recess outdoors.

The president joked that he would have to instill some “flinty Chicago toughness” into his neighbors. "When it comes to the weather, folks in Washington don't seem to be able to handle things.”

That lesson may have to wait for the next winter storm: after a late-day wave of precipitation, DC's forecast for tomorrow is sunny, with highs in the upper 30s.

Limbaugh: Obama is 'frightened of me'

Limbaugh’s comments followed reports Obama warned GOP congressional leaders last week that they should stop listening to the conservative talker, who had said on air he wanted the new president to fail.

"Now this is the great unifier," he told listeners Monday. "This is the man who's going to unify everybody and usher in a new era of bipartisanship and love."

WASHINGTON (CNN) - President Obama has his blackberry — but his tech-savvy press operation has been without e-mail for most of the day, and it’s not yet clear when they’ll get it back.

Obama press staffers had just made the leap to their official White House e-mail addresses Monday morning when the Outlook server went down. They weren’t the only ones affected by the crash, which also hit the first lady’s office and other White House offices.

An apologetic Press Secretary Robert Gibbs told reporters at 1:30 pm press briefing that the server meltdown was responsible for the delay in responding to their e-mailed questions. But late Monday, nearly six hours since the server first went haywire, staffers still can’t use their official e-mail addresses — and a press aide could not tell CNN when the press office might be able to start sending and receiving messages again.

[cnn-photo-caption image= http://i2.cdn.turner.com/cnn/2009/images/01/26/art.gillibrand0126.gi.jpg caption="New York Gov. David Paterson announced his pick of Rep. Kirsten Gillibrand to replace Hillary Clinton in the Senate."]
(CNN) - More than three times as many New Yorkers in a new poll blame Caroline Kennedy and her team for the messy process surrounding the search for Hillary Clinton’s Senate replacement than fault the state’s governor, David Paterson - although, on balance, his final selection meets with their approval.

Forty-nine percent of voters surveyed in a Quinnipiac University poll released Monday said Kennedy and her advisers were to blame, to 15 percent who pointed to Paterson. Twelve percent blame both, and 24 percent are undecided.

Overall, the state’s voters approve of Paterson’s selection of Rep. Kirsten Gillibrand, backing the pick 46 to 30 percent, with 24 percent undecided. That margin is higher upstate, where the choice of the Albany-born Gillibrand draws the approval of 55 percent of the region’s voters to 25 percent who disapprove. In New York City, that margin is far smaller: there, the conservative Democrat draws the approval of 41 percent to 34 percent who disapprove. But in the state’s suburbs, her edge falls within the survey’s 3 point margin of error: 35 percent approve, 32 percent do not.

END_OF_DOCUMENT_TOKEN_TO_BE_REPLACED

McCain says he and Palin plan to meet this month 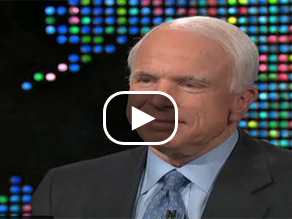 McCain — who has been edging his way back into the spotlight Palin never quite left - dismissed questions over his running mate’s criticism of his campaign team. “Listen, I think the world of Governor Palin, her husband Todd, her family, I'm honored that she would run with me,” he said in an interview Thursday.

“And look, whenever there is a losing campaign there is always a little bit of back and forth, and it happens post-mortem. I am so grateful to have her as a friend, and I believe that she represents a lot to the Republican Party in the future. I think she has a big role to play.”

END_OF_DOCUMENT_TOKEN_TO_BE_REPLACED

View from the Western ball

[cnn-photo-caption image= http://i2.cdn.turner.com/cnn/2009/images/01/20/art.jlomarc0120.gi.jpg caption="Jennifer Lopez and performed with her husband Marc Anthony Tuesday night at the Western Ball."]
(CNN) - Attendees at tonight’s presidential inaugural balls, like the 11,500 at the official Western ball, were lucky to spend maybe 20 minutes of their night with the president. The rest of the time, they were waiting - and not just for the first family to make an appearance.

They waited to get through security. To check their coats. To buy drink tickets, then to exchange those tickets for plastic glasses of chardonnay and mid-priced champagne. To cycle through buffet lines for plates of pasta and dinner rolls, which they’ll eat standing up.

With a few exceptions – like the events dedicated to military personnel, young people and residents of Washington, DC – most balls featured states grouped together by region. The Western ball drew 11,500 guests, from places like Oregon and Idaho to Montana and Guam. Californians like Director Ron Howard and Curb Your Enthusiasm’s Cheryl Hines mixed with residents of Sarah Palin’s home state of Alaska. Both were serenaded by soft rock standards and BeeGees classics. Later in the evening, singer Marc Anthony was set to take the stage.

END_OF_DOCUMENT_TOKEN_TO_BE_REPLACED 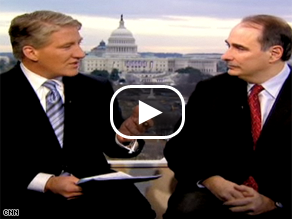 (CNN) - Hours after Israel and Hamas both said they would abide by a fragile cease-fire in Gaza, top Obama advisor David Axelrod told CNN’s John King Sunday to expect the president-elect to take diplomatic action worldwide “early and aggressively” after he’s sworn in, using career diplomats and special envoys.

“I think that the events around the world demand that he act quickly, and I think you'll see him act quickly,” he said in an appearance on State of the Union.

He also said again that Obama will be meeting with the Joint Chiefs of Staff to “begin an orderly and responsible withdrawal from Iraq. He will be doing many of the other things that you heard him commit to during the campaign.”

Axelrod and other senior Obama advisors have spent the past few weeks in discussions with congressional leadership on the shape of a stimulus package that currently stands at roughly $850 million.

“Well, first of all, let me say I think it's telling that [Obama’s] first acts happened before he was president,” the senior aide told King Sunday. “He came to town two weeks early to begin working on an economic recovery package, because getting this economy moving again is absolutely paramount. And so he is going to continue to work on that.

END_OF_DOCUMENT_TOKEN_TO_BE_REPLACED

Top Dem not running in Florida

[cnn-photo-caption image= http://i2.cdn.turner.com/cnn/2009/images/01/16/art.sink1.gi.jpg caption="Sink is not running for Senate."](CNN) - Democrat Alex Sink said Friday that she would skip the state’s 2010 Senate contest.

“Over the past several weeks, I have given serious and careful thought to my own future and, more importantly, to the future of our state,” Sink, Florida’s chief financial officer, said in a statement. “And I am extremely grateful for the support and advice so many friends and fellow Floridians have shared. I believe my skills and abilities are of greatest use here in Florida, where I am honored to serve as Chief Financial Officer. And I will run for re-election as Chief Financial Officer to continue being a fiscal watchdog on behalf of the people of Florida.”

Likely frontrunners in both parties have now taken themselves out of the race to succeed retiring Florida Sen. Mel Martinez: Last week, Republicans looking to keep the seat in GOP hands were disappointed when Jeb Bush, the state’s popular former governor, said he would not be a candidate in 2010.

If Sink had entered the race, she would have been a heavy primary favorite and a formidable fall candidate.

Democratic State Sen. Dan Gelber said Friday that with Sink out of the running, “I expect to officially enter the race in the coming weeks.” Rep. Kendrick Meek, a fellow Democrat, is the only candidate in any party to have officially announced his candidacy.

[cnn-photo-caption image= http://i2.cdn.turner.com/cnn/2009/images/01/15/art.bowarrenhigh0115.gi.jpg caption="Pastor Rick Warren praised President-elect Obama's decision to invite an openly gay bishop to participate in inauguration festivities."]
(CNN) – Rick Warren offered an olive branch to another minister delivering an inaugural invocation — an openly gay Episcopal bishop who had been critical of the evangelical pastor over his support for California’s Proposition 8.

The California minister praised President-elect Obama’s selection of Eugene V. Robinson to deliver the invocation at the kickoff inaugural event.

Obama “has again demonstrated his genuine commitment to bringing all Americans of goodwill together in search of common ground," Warren said in a statement released Wednesday. "I applaud his desire to be the president of every citizen.”

Warren, who is delivering the invocation at the Tuesday swearing-in ceremony, drew fire from some Obama supporters over his opposition to same sex marriage and abortion rights.

Robinson had called Warren’s inclusion “really, really unfortunate” because of his support for Proposition 8, which barred same-sex marriage.

“…This particular choice [of Warren] is not about having everyone at the table for a discussion or some sort of general forum. Every choice related to who does what at the inauguration is highly symbolic, and I think the transition team failed to ask the question of what, symbolically, this might say to some of our citizens.”

Robinson said at the time his disappointment would not affect his plans to attend President-elect Obama’s inauguration.

The Rev. Gene Robinson, Episcopal bishop in New Hampshire, has accepted an invitation issued by the Obama team prior to the announcement of the Rev. Rick Warren’s selection to deliver the invocation at the president-elect’s swearing-in, Politico reported Monday.

Robinson had been a critic of Warren’s role, calling his inclusion in the event “really, really unfortunate” because of the California minister's support for California's Prop. 8, which barred same-sex marriage.