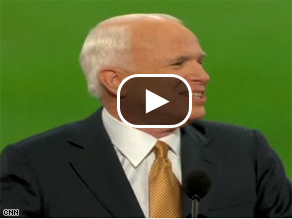 (CNN)–Following John McCain's acceptance address at the Republican National Convention Thursday night, the online buzz was curiosity about the backdrop during the first several minutes of his speech.

The backdrop in question was Walter Reed Middle School in North Hollywood, California.

Some speculated that the campaign had meant to use an image of Walter Reed Hospital, but had pulled the school’s photo by mistake.

The McCain campaign said the speculation was way off the mark. “It was never the intention of the McCain campaign or the Republican National Convention to put up a picture of the Walter Reed Hospital,” said McCain spokesman Tucker Bounds. “Instead, thematic pictures of Americana were shown on the screen behind the podium during the convention including a front porch, an American flag, and a school yard” - which just happened to be Walter Reed Middle School's.

School Principal Donna Tobin writes on the schools Web site, “permission to use the front of our school for the Republican National Convention was not given by our school nor is the use of our school’s picture an endorsement of any political party or view.”

The popular liberal blog Talking Points Memo pointed out that the school appears to be used in the television show “The West Wing” as the location of character Matt Santos’ presidential announcement.

END_OF_DOCUMENT_TOKEN_TO_BE_REPLACED 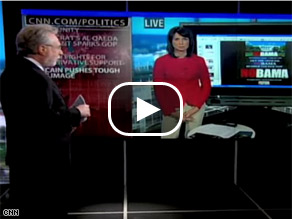