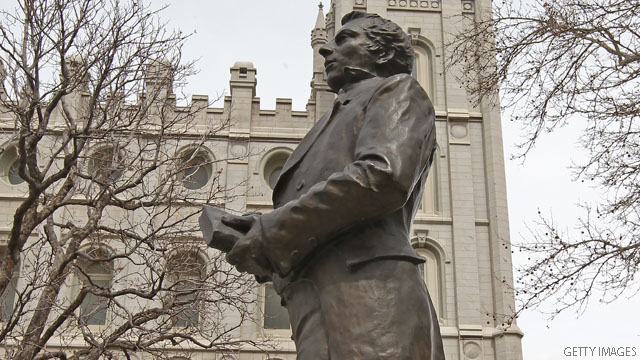 A statue of the founder of the Mormon Church Joseph Smith outside the historic Salt Lake Temple in Salt Lake City, Utah.
August 4th, 2011
01:42 PM ET

(CNN) – America is not ready for a Mormon president, according to Christian author Tricia Erickson. On Wednesday she told CNN's Tom Foreman on In the Arena that she believes a practicing Mormon should not be president because of their theological views on the afterlife and governance.

CNN Belief Blog Co-Editor Eric Marrapodi jumped into the fray on the topic with Foreman as well. He said while religious views shape Mormon politicians on a macro level, there is no evidence Mormon politicians have a "bat phone" to Utah and take orders from the leadership of the Church of Jesus Christ of Latter-day Saints, as the church is formally known.

(CNN) - Members of the Tea Party movement tend to be Christian conservatives, not libertarians, and are more likely than even white evangelical Christians to say the United States is a Christian nation, a detailed new study has found.

More than half of self-identified Tea Party members say America is a Christian nation, while just over four out of 10 white evangelicals believe that – the same as the proportion of the general population that says so.