(CNN)–We didn't hear an answer, but it is an interesting question. He said that we have a moral responsibility to use force to save innocents. How does that apply to Iraq? Saddam Hussein was a mass murderer and gassed his own people. Obama opposed military intervention. Obama also opposed the surge and advocated withdrawal despite the warnings that it would lead to a bloodbath and possible genocide. And now that the surge is helping to quell violence and save lives, Obama says that he would still opposes that action. What does that mean? What about our moral responsibility to the Iraqis? Obama says he's against the Holocaust. Well, for goodness sakes, who isn't? The question is: When would a President Obama order military action? Do we know? Does he know?

Watch: McCain, Obama tell voters when they would send military into action 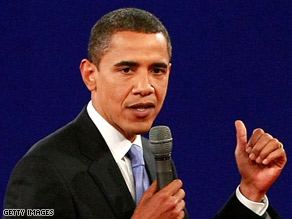 (CNN)–Obama just said that between energy, health care, and entitlement spending, energy was priority number one. This is not what he said in the first debate. During that debate, when he was asked by Jim Lehrer what he may need to compromise in the face of the $700 billion dollar bailout commitment, Obama said he would have to compromise on energy. That was his compromise number one. I thought at the time that it was a surprising and unwise answer. Either he didn't really mean it then, or he doesn't really mean it now.

Holmes: A debate to be proud of

[cnn-photo-caption image= http://i2.cdn.turner.com/cnn/2008/POLITICS/10/02/vice.presidential.debate/art.palin.ap.jpg caption="Holmes: Palin 'wildly' exceeded expectations."]
(CNN)–Palin: A+. The plus is for wildly exceeding expectations. She more than held her own. She was polished, direct, folksy, and on message. She stressed her personal experience both as a mom and as a governor, from the kitchen table to the executive branch, her record as a reformer and bipartisan deal maker. She even got Biden to agree with her.

Biden gets an A. He was tough, but respectful, disciplined and clear. He hammered away at McCain's maverick status. Biden was clearly in his element.

This debate was a credit to both candidates. I think voters can be proud of what they just watched.

(CNN)–Were those Katie Couric interviews a devious head fake? I've heard Biden say at least twice now that he agrees with Palin. First on the issue of windfall profits, and then on the issue of gay marriage. Regarding the first, he actually said he and Obama would like to do what the Governor did in Alaska. Economic conservatives won't like it. But for debate purposes: advantage Palin.

Holmes: Palin gets to shine the light on herself

[cnn-photo-caption image= http://i2.cdn.turner.com/cnn/2008/images/09/03/art.sarah.jpg caption=" Holmes: Palin appears to be a woman who knows who she is."]
For the past five days, the media has pummeled Alaska Gov. Sarah Palin on everything from her fitness as a mother to her fitness as a vice presidential running mate.

Lost in all of the media-generated heat has been very much light on Palin herself - who she is and what she's done.

Tonight, Palin gets to shine that light on her record and speak directly to the American people. Some have said this is a low risk environment for Governor Palin. Being introduced to millions of undecided viewers is never low risk. But the even higher risk may be for the media that has depicted the Governor as a small town country rube. She's never traveled to Europe! Or appeared on Meet the Press! She's only just recently acquired a Passport! Well, speaking French didn't end up being a particular election asset for John Kerry.

The good news for Palin is that the voters don't like the media choosing their politicians for them. This is a democracy, thank you very much, and we're all entitled to make up our minds.

The other good news is that Palin appears to be a woman who knows who she is. She's a woman of core values and strong convictions. That will hold her in very good steady in the media political storm.

Indeed, Al Gore's apparent personal insecurity plagued him throughout his 2000 presidential run. Earth tones, shirtsleeves, too much blush, too little personality. He's a fighter, he's a healer. Not only was it disconcerting to watch, it was unattractive.

Palin is nothing if not confident. And a confident performance tonight will help her connect with all of those voters who finally get to see her for themselves.

[cnn-photo-caption image= http://i2.cdn.turner.com/cnn/2008/images/08/29/art.ap.michelle.barack.dnc.jpg caption="Michelle Obama joined Barack on stage Thursday after his speech."]
As a former speechwriter for former Senate Majority Leader Bill Frist, I heard some very important things that Barack Obama needed to include in his speech tonight.

He personalized, he humanized, he dramatized - that is so important for the listener and viewer to be able to connect with the person who is speaking.

Watch: Fireworks for the Democratic ticket

He also tried to turn the tables on John McCain by characterizing him as out of touch with most Americans' values - he's the one who is the elite, he's the person that is the greater risk in this election. And I thought that was an interesting way to try to take those attacks and turn them on his opponent.

He also attempted to move toward the middle ground - he talked about personal responsibility, that's typically something that conservatives and Republicans talk a lot about. And he also talked about "American exceptionalism" - I heard a lot of "we are the best hope for the world" - and again that's something that Republicans and conservatives talk a lot about.

Tonight, Barack Obama was saying the Democrats can own that too.

Amy Holmes: Who's questioning whose patriotism?

As John Kerry fulminates over supposed attacks by Republicans on Democrats' patriotism, I might remind readers that it was Bill Clinton who seemed to call into Obama's love of country when he said on the campaign trail in Charlotte, North Carolina:

“I think it would be a great thing if we had an election year where you had two people who loved this country and were devoted to the interest of this country. And people could actually ask themselves who is right on these issues, instead of all this other stuff that always seems to intrude itself on our politics.”

Bill Clinton, not known for his self control, is still not over it.

It's been reported that he still resents the suggestion from Obama supporters that he played the race card during the rough and tumble Democratic primary. Perhaps that explains why, last week, he applauded John McCain's energy plan. Yesterday, Bill Clinton seemed to imply that voters could be forgiven for voting for a candidate they only agreed with fifty percent of the time, if they believed he was the candidate who could get things done. Could he have meant John McCain?

And now there are reports that Clinton, Bill that is, plans on skipping Obama's historic speech tomorrow at Invesco Field.

Bill Clinton gave a rousing speech tonight. That's not in question. It's what he's grumbling to his inner circle and coyly suggesting in unscripted remarks that's causing headaches - not to mention what can only be considered a Clinton-sized snub tomorrow night.

But is it all Clinton's fault? Barack Obama has not been exactly gracious about his predecessor's political accomplishments. Indeed, he told the Rena Gazette-Journal:

In one line, Obama managed to diminish Clinton's genuine political accomplishments and compare him to perhaps the most hated figure in the Democratic Party - behind George W. Bush.