WASHINGTON (CNN) - Six key senators – three Democrats, one independent and two moderate Republicans – sent a letter to Senate leaders calling for a slowdown in the push for a health care overhaul, in light of the Congressional Budget Office's assessment that the Democratic plan currently being considered would not cut medical costs

"We believe taking additional time to achieve a bipartisan result is critical for legislation that affects 17 percent of our economy and every individual in the U.S.," read the letter, signed by Democrats Ben Nelson, Mary Landrieu and Ron Wyden. independent Joe Lieberman and Republicans Susan Collins and Olympia Snowe, who also said they were "firmly committed to enactment of comprehensive reform this year."

The letter echoes concerns raised by many conservative Democrats on the House side.

Full text of the letter after the jump.

END_OF_DOCUMENT_TOKEN_TO_BE_REPLACED

[cnn-photo-caption image= http://i2.cdn.turner.com/cnn/2008/POLITICS/12/05/big.three.bailout/art.pelosi.gi.jpg caption="News of November job losses "changed everything" for House Speaker Nancy Pelosi, an official said."] WASHINGTON (CNN) - Help may soon be on the way to the struggling U.S. auto industry after House Speaker Nancy Pelosi backed off her opposition to using funds from a fuel-efficiency research program for a bailout, two congressional officials said Friday.

The significant move from Pelosi signals that the deadlock over rescuing Detroit may be over.

However, one senior Democratic congressional source told CNN that House and Senate committee staff will meet over the weekend to write a bill to provide $20 billion to $25 billion in assistance to the U.S. auto companies.

This aide said the "mathematicians were working" at how to reprogram the money by reducing a subsidy to come up with a figure that would be available for loans, despite an earlier report that only $7.5 billion was available from the fund passed last year for fuel efficiency research.

This aide said the bill could be on the House floor as early as Tuesday, but thought it was more likely that the Senate would vote on the bill first. 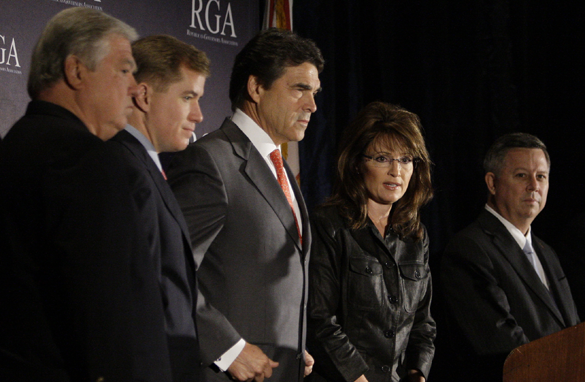 MIAMI (CNN) - Some Republican governors tell CNN they were not particularly happy with the way the Republican Governors Association press conference was executed Thursday, saying that they agreed to go as a show of GOP governors’ unity - but they ended up feeling like silent Palin supporters, since it was clearly a press conference called for her.

The GOP governors spoke to CNN on condition of anonymity.

One called it awkward: “I’m sure you could see it on some of our faces.”

Another Republican governor eyeing a presidential run in 2012 told CNN the event was “odd” and “weird,” and said it “unfortunately sent a message that she was the de facto leader of the party."

There has been palpable tension among some GOP governors gathered in Miami that Palin has been sucking up all the media oxygen.

In an interview with CNN, Mississippi Gov. Haley Barbour shrugged off that suggestion.

"That's just somebody running down a rabbit trail. There's plenty of oxygen here,” he said.

[cnn-photo-caption image= http://i2.cdn.turner.com/cnn/2008/images/11/06/art.palin.ap.jpg caption="Some McCain advisers were frustrated by Palin."](CNN) - Republican VP nominee Sarah Palin had prepared to deliver a concession speech before John McCain’s Tuesday night — and brought her remarks with her to his Phoenix concession - but senior McCain campaign adviser Steve Schmidt told her she could not.

Two McCain sources say Palin clearly did not understand the protocol of a concession speech, and expected she would have the chance to deliver one of her own.

McCain advisers were also upset with the Alaska governor for setting up what she thought was a call from French President Nicolas Sarkozy. The call, which turned out to be a prank from Quebec radio hosts, was not cleared with the McCain campaign and some saw the effort to set it up as evidence of her future presidential ambitions.

A Palin ally involved in setting up the call, however, suggests McCain advisers had ample time to object given the call was on her schedule for three days.

Two McCain sources also say Palin did not know Africa was a continent and could not find it on a map. A third source, a Palin ally, says that was a miscommunication.

[cnn-photo-caption image= http://i2.cdn.turner.com/cnn/2008/images/11/06/art.scheunemann.gi.jpg caption="Scheunemann (above, with Cindy McCain and Sarah Palin) denies he was dismissed from the campaign."](CNN) - McCain’s presidential bid has ended, but the fireworks from inside his former campaign continue to make news: evidence is mounting that senior adviser Randy Scheunemann wasn’t fired, as several internal sources had suggested, but the target of a deliberate whispering campaign.

Campaign manager Rick Davis denied a report he had fired Scheunemann after determining that he had been in direct contact with journalists spreading "disinformation" about campaign aides, including Nicolle Wallace and other officials.

"My impression is there is some silly score settling being done," Davis told CNN. "Randy was not fired."

Scheunemann himself said sources who said he had been dismissed were lying.

"I was not fired,” he said Thursday. “Anybody who says so is either lying or delusional and is certainly a whack job."

END_OF_DOCUMENT_TOKEN_TO_BE_REPLACED

One of the aides tells CNN that campaign manager Rick Davis fired Scheunemann after determining that he had been in direct contact with journalists spreading "disinformation" about campaign aides, including Nicolle Wallace and other officials. (Update: Davis denies the claim.)

Update: Scheunemann disputes campaign sources, says he was not fired

"He was positioning himself with Palin at the expense of John McCain's campaign message," said one of the aides.

Senior campaign officials blame Schuenemann specifically for stories about the way Wallace and chief campaign strategist Steve Schmidt mishandled Palin's rollout - stories that the campaign says threw them off message in the critical final weeks of the campaign.

Another aide said McCain personally was "very disappointed by Randy," who worked for McCain for many years in the Senate.

Scheunemann became close with Palin during her debate prep process.

This aide says that Reid, who is calling the meeting, has not yet decided what to do. The aide admits that the decision will be determined in part by the final election results tonight - and just how close the party is to a filibuster-proof 60-seat majority - but insists that the biggest factor involved is lingering anger among Senate Democrats over Lieberman's Republican convention speech.

This aide also said that Senate Democrats aren't that upset about Lieberman's constant presence and cheerleading on the campaign trail with John McCain - instead, they've been put off by the things he said about Barack Obama at the Republican convention in St. Paul.

(CNN) - Two senior aides to John McCain see "no path to victory," given the night's results so far.

The two advisors, who were crunching numbers for the Republican contender, were responding to a question via e-mail from CNN's Dana Bash, who has been covering the McCain campaign.

The aides asked not to named because the campaign is not commenting on internal discussions.

Three states that went Republican in 2004 have gone for Democrat Barack Obama, according to CNN projections - Iowa, New Mexico and Ohio.

But three McCain sources tell CNN that little more than three months ago, Duberstein was pushing to run John McCain’s post-election transition to the White House - a charge Duberstein himself insists is not true.

One of the sources says he was contacted by Duberstein in July with a request to relay a message to the McCain team that he thought he would be an “ideal” person to run the Republican nominee's transition.

This source - who noted that at the time McCain was doing well in the polls - said he and Duberstein had several conversations about it, and that he did pass that information along to the campaign.

END_OF_DOCUMENT_TOKEN_TO_BE_REPLACED

McCain to appear on SNL this weekend

Two weeks after running mate Sarah Palin made an appearance on the late-night comedy show, a McCain campaign aide tells CNN that the Republican presidential nominee will appear on the NBC program tomorrow night.

The Arizona senator has appeared on the show several times over the years.

McCain's most memorable appearance on the long running show was in October 2002, when he hosted the program for a night: In a spoof commercial hawking an album called "McCain Sings Streisand," sang several of the Democratic loyalist's songs.