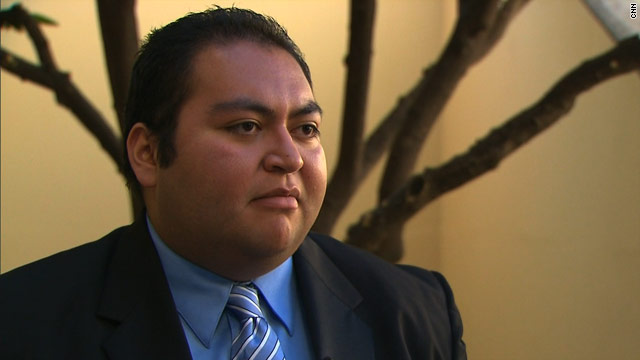 Tucson Shooting Hero to be honored at State of the Union

Washington (CNN) – It is a Washington ritual at the State of the Union address. The president honors special guests by inviting them to sit alongside the first lady in her reserved box in the House chamber.

This year the special guests will include at least one of the heroes from the tragic Tucson shooting. White House spokesman Nick Shapiro tells CNN Daniel Hernandez, the intern who assisted Rep. Gabrielle Giffords after she was shot in the Safeway parking lot, will join First Lady Michelle Obama for the speech.
END_OF_DOCUMENT_TOKEN_TO_BE_REPLACED

The tone of President Obama's speech in Tucson

D.C. mayoral primary may be felt far beyond the District

Washington (CNN) - Mayor Adrian Fenty swept into office in 2006 promising to fix the District of Columbia's struggling schools. Now, Fenty is in the fight of his career in part because of how he's tried to reform the district's schools.

Fenty is in a nail-biter of a race in Tuesday's primary, running neck-and-neck with challenger and City Council Chairman Vincent Gray.

"We've got an uphill battle because we made tough decisions," said Fenty while campaigning at a local street fair. "We'll continue to make those tough decisions because they're right for the people. But we're not naive. We know this has cost us a little political popularity that we came into the polls with."

While this is a local election - the Democratic mayoral primary - the race is being closely watched far beyond the District because the outcome could carry significant implications for the national debate over education reform.

Alaskan lawmakers say 'thanks but no thanks' to Palin veto

[cnn-photo-caption image= http://i2.cdn.turner.com/cnn/2009/images/07/25/art.palinbye0725.cnn.jpg caption="Sarah Palin's veto of $28 million in stimulus cash was overturned on Monday."](CNN) - Just one week after Sarah Palin stepped down as governor of Alaska, Alaskan lawmakers succeeded in overriding her veto of federal stimulus dollars.

The legislature voted Monday 45-15 in favor of overturning the former governor's veto of more than $28 million in Recovery Act funds targeted toward energy efficiency projects.

The Alaska legislature met for a one-day special session in Anchorage. Heading into the vote, Rep. Mike Hawker, who voted in support of finally accepting the stimulus funds, anticipated a close decision, coming down to a couple of votes either way.

“I think it's tight,” the Anchorage Republican said before the vote. A veto override in Alaska requires a three-fourths majority of the entire legislature.

Palin rejected the Department of Energy money in May and continues to defend the controversial move.

"As Governor, I did my utmost to warn our legislators that accepting stimulus funds will further tie Alaska to the federal government and chip away at Alaska's right to chart its own course," Palin wrote on her Facebook page Sunday. "Enforcing the federal building code requirements, which Governor Parnell and future governors will be forced to adopt in order to accept these energy funds, will eventually cost the state more than it receives."

END_OF_DOCUMENT_TOKEN_TO_BE_REPLACED

Official: Obama granted use of appropriate force to rescue captain

Obama granted the authority to use appropriate force with the focus on saving and protecting Phillips’ life. The requests were made by the Pentagon Friday and Saturday. For technical reasons, authority was granted two different times, according to the official, because different U.S. forces moved in the region near the coast of Somalia.

CNN has also learned that Obama has phoned Phillips on board the USS Boxer as well as Phillips’ wife and family at their home in Vermont.

In a statement issued by the White House after Phillips had been successfully rescued, the president said his administration is “resolved to halt the rise of piracy in this region.”

“To achieve that goal, we must continue to work with our partners to prevent future attacks, be prepared to interdict acts of piracy and ensure that those who commit acts of piracy are held accountable for their crimes."

[cnn-photo-caption image= http://i2.cdn.turner.com/cnn/2009/images/04/12/art.bosolo0412.wh.jpg caption="Bo, a six-month old Portuguese water dog, was given to the first family by Sen. Ted Kennedy."]
WASHINGTON (CNN) - CNN has confirmed that President Obama and the first lady will make a donation to the Washington D.C. Humane Society.

The first family originally planned to get their new dog from an animal shelter but ultimately settled on a puppy given to them by Sen. Ted Kennedy, one of the president's close political allies.

The donation was first reported by the Washington Post which described the plan to give the money as "intended [by the Obamas] to lend a serious symbolic note" to their original pledge to get a shelter animal.

In a statement released Sunday, the Humane Society of the United States urged action from the new administration to protect animals across the country.

“President Obama can do even more for animal protection through the policies of federal agencies that deal with the welfare of millions of pets,” the statement said, by “helping us enforce existing animal welfare laws and cracking down on the national shame of rampant puppy mills in America.”