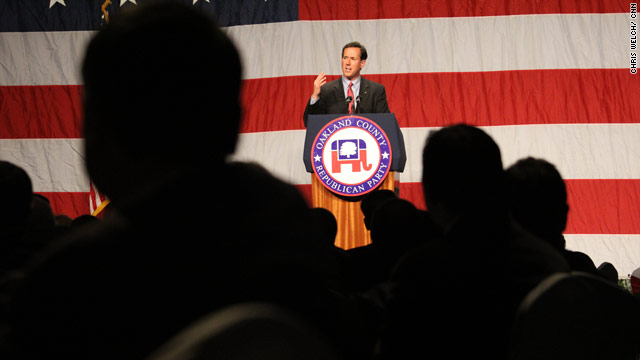 END_OF_DOCUMENT_TOKEN_TO_BE_REPLACED

"I don't really know the answer to that," Santorum told CNN when asked whether he had formally put in a request. "All I know is it's been an internal discussion and we've been talking to them about whether this is something - whether it's something we should do or not. But I don't know if we've made a formal ask."

END_OF_DOCUMENT_TOKEN_TO_BE_REPLACED

The judges said that starting Tuesday, the proceedings will follow a regular 9 am to 4:30 pm schedule, with an hour break each day for lunch, adding that they aim to make the process speedy as "there is some urgency to this matter."

END_OF_DOCUMENT_TOKEN_TO_BE_REPLACED

Minnesota judge to GOP lawyer: This is not the Florida recount

[cnn-photo-caption image= http://i2.cdn.turner.com/cnn/2008/images/12/16/art.mncount1216.cnn.jpg caption="The canvassing board met this week in Minnesota to review ballots in the state's very tight race for a U.S. Senate seat up for grabs"]ST. PAUL, Minnesota (CNN) – A Minnesota justice hearing arguments from attorneys facing off in the year's last remaining Senate contest told a legal veteran of the 2000 presidential recount that his state is "not Florida."

Speaking for Coleman before the panel of justices was attorney Roger Magnuson, no stranger to recount battles, who represented the Florida's state senate in Bush v. Gore.

If the state’s canvassing board includes any of the "improperly rejected absentee ballots" at the heart of the dispute, warned Magnuson, this race could easily turn into the debacle that ensued in Florida eight years ago.

He was immediately interrupted by Associate Justice Paul Anderson, who appeared to take serious issue with the analogy.

END_OF_DOCUMENT_TOKEN_TO_BE_REPLACED

[cnn-photo-caption image= http://i2.cdn.turner.com/cnn/2008/TECH/11/06/hologram.yellin/art.hologram.cnn.jpg caption="CNN's Jessica Yellin appeared live as a hologram before anchor Wolf Blitzer Tuesday night in New York."]
(CNN) - It was an election night like none other, in every sense of the phrase. In addition to the obvious - the selection of the nation's first black president - Tuesday night's coverage on CNN showcased groundbreaking technology.

"I want you to watch what we're about to do," CNN anchor Wolf Blitzer told viewers early in the evening's coverage, "because you've never seen anything like this on television."

And he was right. Cue CNN political correspondent Jessica Yellin.

"Hi Wolf!" said Yellin, waving to Blitzer as she stood a few feet in front of him in the network's New York City studios. Or at least, that's the way it appeared at first glance.

In reality, Yellin - a correspondent who had been covering Sen. Barack Obama's campaign - was at the now president-elect's mega-rally along the lakefront in Chicago, Illinois, more than 700 miles away from CNN's Election Center in New York.

It looked like a scene straight out of "Star Wars." Here was Yellin, partially translucent with a glowing blue haze around her, appearing to materialize in thin air. She even referenced the classic movie on her own, saying, "It's like I follow in the tradition of Princess Leia. It's something else."

Obama: McCain is to Bush as Robin is to Batman

[cnn-photo-caption image= http://i2.cdn.turner.com/cnn/2008/images/10/23/art.mccainbush.ap.jpg caption=" Obama compared Pres. Bush and McCain to Batman and Robin."]
ALBUQUERQUE, New Mexico (CNN) - Barack Obama took his comparisons of John McCain and President Bush one step further Saturday night at a rally in New Mexico, implying the two Republicans are like the duo of Batman and Robin.

"John McCain suggested that he would be the one to change George Bush's policies," Obama said, before adding that if that were to happen it'd be "like Dick Cheney attacking George Bush."

"It's like Robin getting mad at batman. John McCain hasn't been a maverick. He's been a sidekick when it comes to George Bush's economic policies.”

Earlier in the weekend, Obama said running mate Joe Biden had said McCain criticizing Bush would be "like Tonto getting mad at the Lone Ranger."

Biden never actually said that - but he has made similar references using Butch Cassidy and the Sundance Kid.

The Illinois senator heads to battleground Colorado for events Sunday.

[cnn-photo-caption image= http://i2.cdn.turner.com/cnn/2008/images/10/25/art.boreno1025.ap.jpg caption="Obama: McCain really stuck it to Bush - 10 percent of the time."]
RENO, Nevada (CNN) - Democrat Barack Obama levied more criticism at opponent John McCain Saturday, mocking the Arizona Republican by saying McCain is just "trying to break with his president over the last ten days after having supported him for the last eight years."

Though, to be clear, Obama's running mate Joe Biden never actually said that publicly. Biden has, however, made similar references using Butch Cassidy and the Sundance Kid.

The Illinois senator is spending the day out west. In addition to Reno's event, he's also holding a rally in Las Vegas, as well as one in Albuquerque, New Mexico.

[cnn-photo-caption image= http://i2.cdn.turner.com/cnn/2008/images/10/25/art.bosad1025.ap.jpg caption="Sen. Obama boards his plane in Honolulu to head back to the campaign trail after visiting his ailing grandmother."]
HONOLULU, Hawaii (CNN) - Democratic presidential nominee Barack Obama wrapped up almost two days worth of time away from the campaign trail Friday evening, as he finished spending time in Hawaii with his ill grandmother, 85-year-old Madelyn Dunham.

Earlier in the week, senior strategist Robert Gibbs described Dunham's condition as "very serious," but the campaign has not provided any further details.

Since arriving in Hawaii Thursday evening, Obama has kept a low profile, appearing within cameras' range only once, when taking a walk alone through his grandmother's neighborhood near Waikiki Beach on the island of Oahu.

END_OF_DOCUMENT_TOKEN_TO_BE_REPLACED

Obama discussed the bailout package that lawmakers hope to pass this weekend before markets open on Monday, laying out his proposals and reiterating the need for strict oversight.

“This administration started off by asking for a blank check to solve this problem,” said Obama. “It is unacceptable to expect the American people to hand this administration or any Administration a $700 billion without any conditions attached, without any oversight when a lack of oversight in Washington and on Wall Street is exactly what got us into this mess in the first place.”

The Illinois senator mocked McCain for stealing the Democrats’ lines, laughing, “You gotta come up with your own stuff!”

“He's been grabbing our signs, using our slogans,” said Obama. “The other day he said, I think, we need to ‘turn the page.’ It's like, come on, John! I've been saying that for – how long have I been saying that? Pretty soon I'm going to have to start saying I'm a maverick!”

END_OF_DOCUMENT_TOKEN_TO_BE_REPLACED

The Arizona senator, who often mentions his time as a prisoner of war during the Vietnam era, graduated from the Academy in 1958, along with fellow alumni John Poindexter and Robert “Bud” McFarlane—two consecutive national security advisers serving under President Ronald Reagan who both played a role in the Iran-Contra affair. McCain's son, Jack, is currently a senior at the Naval Academy.

UPDATE: McCain and wife Cindy appeared to have left earlier than planned, as staff and U.S. Secret Service traveling with the press pool were caught off guard. The White House hopeful stayed long enough to see only the first quarter before he departed.