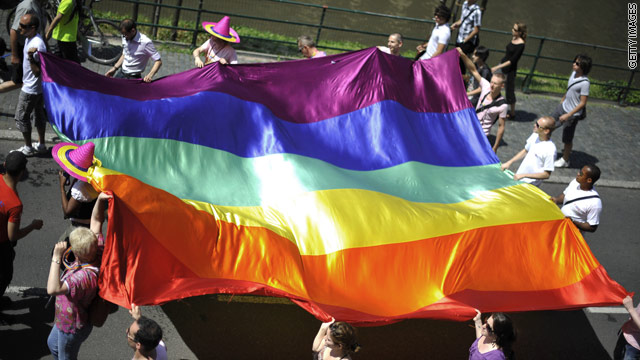 Washington (CNN) - The man tasked with maintaining Democratic control of the House told reporters that it is "a mistake" to announce a Republican takeover of that chamber.

"I think that's a mistake," Rep. Chris Van Hollen said in response to learning that some news outlets had begun declaring a GOP victory in the House.
END_OF_DOCUMENT_TOKEN_TO_BE_REPLACED

Democrats are seeking a one hour voting extension in Bridgeport, Connecticut because the town ran out of ballots.

"Turnout was so huge they ran out of ballots of every sort," Menendez said. "And so we, as we speak, are going to court to seek an hour extension, so that voters can continue to vote. There are huge lines there."
END_OF_DOCUMENT_TOKEN_TO_BE_REPLACED

Washington (CNN) - Arkansas Rep. Marion Berry is expected to announce Monday that he will not seek re-election and instead retire at the end of the year, two Democratic sources confirm to CNN.

Berry would become the 12th Democrat to announce that he will not run for his House seat again in 2010. Six of those Democrats, including Berry, will not be running for another office, while the other six are either seeking a Senate seat or the governorship of their state.

For now, Rick Crawford is the only Republican in the race for Berry's seat, but with his decision to retire, expect others to jump in.

Democratic leaders are keeping a close eye on their colleagues hoping to convince any fence-sitting Democrats to run for re-election in November. Across the aisle, House Republicans face 14 retirements, 11 of whom are running for another office.

The Washington Post first reported that Berry would retire on its Web site Sunday evening.

[cnn-photo-caption image= http://i2.cdn.turner.com/cnn/2009/POLITICS/05/06/liberal.republicans/art.specter.gi.jpg caption="Pennsylvania Sen. Arlen Specter's brought Capitol Hill police to his rowdy town halls on Tuesday."]Lewisburg, Pennsylvania (CNN) - Tough crowds asking pointed questions is not the only concern Sen. Arlen Specter has as he holds town halls all across his home state of Pennsylvania.

He's also concerned about his personal safety, which is why he brought along some United States Capitol Hill Police officers as he traveled to two town halls on Tuesday.

The sometime raucous events in Lebanon and Lewisburg, which Specter called "civil," were largely full of constituents expressing their anger over the health care plan working its way through Congress.

The Democrat earlier this year switched parties and could face a tough re-election fight next year.

After his town hall event at the campus of Bucknell University in Lewisburg, Specter defended his decision to have Congress' special police force travel with him back home.

"I would say, that given the temper of the times, the fact that in some areas there have been fights breaking out and people hospitalized - and one member's statue was hanged in effigy - [safety] is a big challenge," said Specter.

END_OF_DOCUMENT_TOKEN_TO_BE_REPLACED

[cnn-photo-caption image= http://i2.cdn.turner.com/cnn/2008/images/08/28/art.brimley.ap.jpg caption="McCain joked he has chosen Wilford Brimley to be his VP."]

DAYTON, Ohio (CNN) - John McCain appears to be comfortable with the selection of his running mate, whoever that person may be.

Upon arriving in Dayton, Ohio, Thursday evening, the presumptive Republican presidential candidate was asked on the airport tarmac who he has selected for the No. 2 job.

McCain has been very coy in responding to reporters’ questions about his vice presidential selection process, most recently remaining quiet when asked, or simply raising his thumbs in the air. The candidate’s offbeat joke about Brimley, the 73-year-old actor known for his roles in Cocoon, Our House, and diabetic health commercials, likely reflects the state of ease he is currently experiencing as the months-long search for a running mate is over.

That is, if he was joking.