Steele: GOP must be careful on Sotomayor

[cnn-photo-caption image= http://i2.cdn.turner.com/cnn/2009/images/03/18/art.getty.steele.rnc.jpg caption="Michael Steele says the GOP does not 'want to be perceived as a bully.'"]WASHINGTON (CNN) - The head of the Republican Party wants his forces to watch their steps when it comes to Supreme Court hopeful Sonia Sotomayor.

Republican National Committee Chairman Michael Steele told CNN Radio Tuesday the party that he hopes will include more Hispanics must be cautious in how it scrutinizes a groundbreaking Latina judge.

"You want to be careful," he said when asked about juggling Hispanic outreach with potential opposition to Sotomayor, "You don't want to be perceived as a bully."

Indeed, Steele was mild in his initial jabs, calling Sotomayor an "interesting pick" with "overwhelming political overtones to it." The RNC chairman listed classic conservative question marks. "We do have some reservations and concerns about her views on the second amendment, her views on abortion, her views on property rights," he said.

END_OF_DOCUMENT_TOKEN_TO_BE_REPLACED

[cnn-photo-caption image= http://i2.cdn.turner.com/cnn/2009/images/05/08/art.bobaby0508.gi.jpg caption="The president's first name showed a dramatic leap in popularity from 2007 to 2008, according to the Social Security Administration."]
WASHINGTON (CNN) – Then-Sen. Barack Obama's name may have been everywhere during the presidential campaign, but it did not make the top 1000 most popular picks for babies. Still, it gained popularity.

During 2008, the new president's first name ranked 2,409th on the Social Security Administration's annual list of the most popular baby names. That's a jump of more than 10,000 spots from the name's previous ranking in the 12,535th spot during 2007.

"President Obama's popularity peaks among Americans under the age of 30, who are, in turn, most likely to be having babies," says CNN Polling Director Keating Holland.

For more information about the Social Security Administration's annual rankings that were released Friday, click here.

Most lawmakers, staffers and reporters Thursday were depending on just a handful of details given out the day before by Reid, Finance Chairman Max Baucus, D-Montana, and two key negotiators, Senator Susan Collins, R-Maine and Senator Ben Nelson, D-Nebraska.

Collins read off some figures from a handwritten and somewhat crumpled sheet of paper.

END_OF_DOCUMENT_TOKEN_TO_BE_REPLACED

Congress voted in 2007 to raise the secretary of state’s salary by $4700. That move meant Clinton’s nomination was in conflict with Article I, section 6 of the Constitution, which prohibits members of Congress from raising the salary for a government job, then leaving the Capitol to fill the position themselves.

(CNN) - The roller coaster Alaska Senate race could take another turn Wednesday when election officials there plan to count some 50,000 absentee and early ballots which previously have not been totalled.

Stevens and Begich are currently separated by just 3,257 votes, according to the Alaska Division of Elections Web site.

But those numbers primarily reflect votes cast on Election Day. In a statement, Alaska elections officials said that no absentee or early votes have been counted yet because the state wanted to check each one against precinct voter lists.

The officials estimate some 50,000 of the uncounted votes have now been cross-checked and will be counted Wednesday.

That could provide a big bounce for either candidate, but it may not end things. State figures indicate another 20,000 early and absentee votes are still being authenticated and will not be tallied yet.

[cnn-photo-caption image= http://i2.cdn.turner.com/cnn/2008/images/08/06/art.capital.flower.gi.jpg caption="Rep. Michael Burgess things the 'Paris Hilton plan' for energy should be considered."]
CAPITOL HILL (CNN) - The lines between celebrity and politician blurred into a haze Thursday at a Republican news conference, as one congressman began pushing Paris Hilton's “plan” on energy.

Burgess and his fellow Republicans are in day five energy speeches on the House floor, despite the fact that the chamber is closed for August recess. They're trying to pressure House Speaker Nancy Pelosi into holding a vote on offshore oil drilling.

As they plan for another week of House protest, those Republicans have found an unlikely ally and publicity magnet in Hilton. The model and actress launched a parody campaign commercial earlier this week, suggesting a hybrid of energy plans from presidential candidates Barack Obama and John McCain

"We can do limited offshore drilling, with strict environmental oversight," the heiress suggested in an animal print bathing suit, "while creating tax incentives to get Detroit making hybrid and electric cars."

END_OF_DOCUMENT_TOKEN_TO_BE_REPLACED 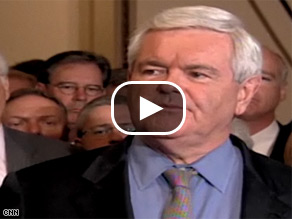 Watch Gingrich push for a vote on oil drilling.

WASHINGTON (CNN) – He led Republicans into a government shutdown in the 1990s and now former House Speaker Newt Gingrich indicates his party is seriously considering another shutdown threat to force a vote on offshore oil drilling in September.

House Republicans brought Gingrich to the Capitol Wednesday, partly to revive media coverage on their fourth day of protest speeches in the chamber. The rest of Congress is gone for August recess, but Republicans have been speaking on the closed-down House floor, calling for a special session to vote on drilling and energy.

While Gingrich did attract more camera crews, he also pointed to what may be the GOP's next strategy: if Democrats refuse to hold a separate vote on oil drilling, Republicans could try to block the votes needed to keep government running past September 30.

"Are (Democrats) really prepared to close the government in order to stop drilling?", Gingrich asked, "Because I think the country will find that to be a suicidal strategy."

The precise maneuvering of a shutdown threat is complicated, but it revolves around the fact that key government spending bills expire when the fiscal year ends on September 30th and Congress must vote next month to keep the government operating.

END_OF_DOCUMENT_TOKEN_TO_BE_REPLACED

The senators point to a recent study from the RAND Corporation that estimates 320,000 troops from the two Iraq wars experienced a traumatic brain injury, or TBI.

"We are concerned that at a time when TBI is recognized as the signature wound of the conflicts in Iraq and Afghanistan," the senators write, "one of the most widely accepted and critical rehabilitative treatments for this injury… cognitive rehabilitation therapy, is excluded by the military's … health insurance program."
The other senators signing on to the letter include political notables Sen. Hillary Clinton, D-New York, Sen. Ted Kennedy, D-Mass, Sen. John Kerry, D-Mass and Sen. Joe Lieberman, D-CT. Obama and Bayh's name are clearly perched at the top.

[cnn-photo-caption image= http://i.cdn.turner.com/cnn/2008/images/05/06/thecapitol.jpg caption="House Republicans plan to hold protest sessions to pressure Nancy Pelosi to hold votes on offshore drilling."]
WASHINGTON (CNN) - A group of House Republicans stayed in session and continued energy speeches Monday despite the summer adjournment in hopes of pressuring Democrats for a vote on oil drilling.

The speeches, a mix of democratic defiance and political showmanship, were part of a plan to pressure House Speaker Nancy Pelosi, D-California, to hold votes on offshore drilling, nuclear power and other GOP energy proposals.

Republicans refused to leave the House floor on Friday and began five hours of speeches protesting against Democratic energy policies immediately after the House of Representatives adjourned for its annual five-week break.

Listen: House GOP ask for the 'opportunity to vote'

The speeches picked up again Monday morning, and Republicans have pledged to keep up the effort.

Price said 24 congressmen returned to the Capitol for Monday's session.

Rep. Mike Pence, R-Indiana, said that 40 Republican members are committed to rotate in shifts throughout the week. Asked how long they'll be there, he said, "We'll be here as long as we can."