Schneider: Is Obama the superpresident?

On his job rating, Obama comes out just a little better. But he really stands out on personal qualities.

According to Gallup polling examining past presidents' job approval, that's similar to where the last six elected presidents stood after 100 days.

Only Ronald Reagan got a slightly higher rating (67 percent). Bill Clinton and the first President Bush were both below 60.

The average for the six recent presidents after 100 days: 61 percent approval. All were in the same general range - between 55 and 67 percent.

They were all elected after the late 1960s, when the great division in American politics emerged. Conservative versus liberal. Red versus blue. Each has taken office with a hard core of supporters and opponents.

[cnn-photo-caption image= http://i2.cdn.turner.com/cnn/2009/images/04/08/art.getty.pelosi.flags.jpg caption=" CNN's Larry King asked House speaker Nancy Pelosi on Tuesday if the economy is turning around."]WASHINGTON (CNN) - There is evidence that the country's economic outlook is improving. But you have to look very closely.

The number of Americans who say things are going well in the country has crept up a few points, according to a new CNN/Opinion Research Corporation poll. In December, 20 percent of Americans said things in the country were going "well." Now, 23 percent do.

END_OF_DOCUMENT_TOKEN_TO_BE_REPLACED

Schneider: Why the public opinion shift on gun control?

Yes. And in a very surprising way.

Are we seeing an impact on public opinion?

END_OF_DOCUMENT_TOKEN_TO_BE_REPLACED

[cnn-photo-caption image= http://i2.cdn.turner.com/cnn/2009/images/04/03/art.obama1.gi.jpg caption="Will Americans start blaming President Barack Obama for the bad economy?"]WASHINGTON (CNN) - Have Americans been prepared for Friday's bad news about the economy? It looks like they have.

They were warned even before President Obama took office.

President-elect Obama said on January 8th. "It is altogether likely that things may get worse before they get better."

"Our jobs report came out today, and it showed that we had lost 663,000 jobs just this month, which has pushed our unemployment rate to 8.5 percent - the highest in 25 years," the President said today at a news conference in Germany, a few hours after the Labor Department reported the March unemployment report.

END_OF_DOCUMENT_TOKEN_TO_BE_REPLACED

Schneider: Spring training for the next presidential race

[cnn-photo-caption image= http://i2.cdn.turner.com/cnn/2009/images/04/01/art.gopers.cnn.jpg caption="Who is on deck to lead the Republican Party?"](CNN) - It's spring training, when hope springs eternal for the coming season. That's true for baseball players and for political players.

The scouts are out there, eyeballing hot prospects for the next Republican pennant race. Right now it's wide open.

"We don't have one spokesman right now. That's just one of the features of not having either house in Congress or having the White House. You don't have an official place to be heard," former Massachusetts Governor and former GOP presidential hopeful Mitt Romney told CNN's Larry King recently.

Romney's the Republicans' power hitter. Republicans have a history of nominating candidates who ran and lost before - Ronald Reagan, Bob Dole, John McCain. Romney ran in the last presidential campaign and did pretty well.

He wins straw polls of conservative insiders all the time, including the 2007 Iowa straw poll and the last three straw polls taken at the Conservative Political Action Conference (CPAC).

"This is the time to pare back government spending. It is not the time to fulfill every liberal dream and spend America into catastrophe," Romney told CPAC in February.

END_OF_DOCUMENT_TOKEN_TO_BE_REPLACED

[cnn-photo-caption image= http://i2.cdn.turner.com/cnn/2009/images/03/30/art.getty.first.couple.jpg caption=" Michelle Obama embodies a new American brand - diversity and accomplishment."] (CNN) - What can the First Lady accomplish when she accompanies her husband on his first trip to Europe? She can play a role in the re-branding of America.

President Obama has star power. We saw it when he traveled to Europe during the campaign. So does the first lady - when Michelle Obama accompanies her husband overseas this week, it's likely to double the wattage.

"I believe in this nation. And I believe in my husband," the first lady said in a recent interview on ABC's "Good Morning America."

President Obama remains a figure of hope to the world. But he is not immune from criticism, and his policies have been under attack abroad as well as at home.

"He talks about a large stimulus campaign by Americans. All of these steps, their combination and their permanency, is a way to hell," said Czech Prime Minister Mirek Topolanek.

Some foreign leaders are resentful because the financial crisis that threatens to undermine the world economy started in the United States.

END_OF_DOCUMENT_TOKEN_TO_BE_REPLACED

[cnn-photo-caption image=http://i2.cdn.turner.com/cnn/2009/POLITICS/03/28/afghanistan.polls/art.afghanistan.gi.jpg caption="U.S. forces have been engaged in fierce fighting to oust the Taliban in Afghanistan."]

WASHINGTON (CNN) - How does the American public feel about the war in Afghanistan? In a word, wary.

"The United States of American did not choose to fight a war in Afghanistan. Nearly 3,000 of our people were killed on September 11, 2001," Obama said Friday.

"We have a clear and focused goal: to disrupt, dismantle and defeat al Qaeda in Pakistan and Afghanistan," he said.

Stressing that "the safety of people around the world is at stake," Obama said the "situation is increasingly perilous" in the region in and around Afghanistan, where the United States has been fighting al Qaeda and the Taliban for more than 7½ years after attacks in New York and at the Pentagon.

Nevertheless, the American public has been wary about the war in Afghanistan, according to a CNN/Opinion Research Corp. poll conducted in February. 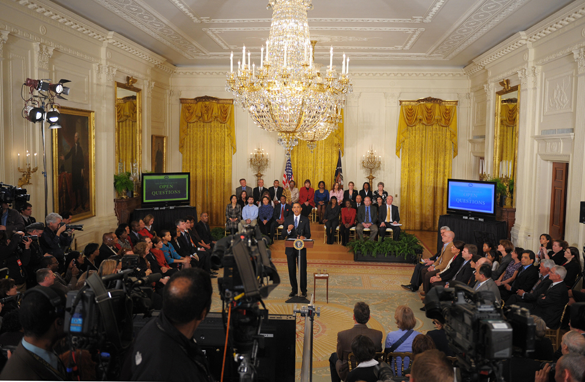 END_OF_DOCUMENT_TOKEN_TO_BE_REPLACED

[cnn-photo-caption image= http://i2.cdn.turner.com/cnn/2009/images/03/24/art.obamaed.gi.jpg caption=" Obama said he wanted time to think about his AIG response."](CNN) - President Obama gave a pretty tough answer to CNN's Ed Henry when asked why he waited days to express outrage on the AIG bonuses.

"It took us a couple of days because I like to know what I'm talking about before I speak," he said.

It seemed to imply the question was impertinent.

[cnn-photo-caption image= http://i2.cdn.turner.com/cnn/2009/images/03/24/art.obamacnn.cnn.jpg caption="President Obama supports lowering the tax rate at which the wealthiest individuals are able to deduct from their charitable donations."](CNN) - President Obama's proposal on limiting tax deductions on charitable donations will not sit well with charitable organizations. Charities often raise most of their money from wealthy individuals. They say many wealthy donors could be discouraged from giving if their tax deductions are less.

He'll have a fight on his hands over this one.