(CNN) - Procurement reform is difficult because every expenditure is politically sensitive. When a president starts cutting and reforming procurements, he can make permanent political enemies.

The president is trying to argue his major spending proposals will lead to this needed economic growth.

(CNN) - The president appears very comfortable discussing complex issues and often performs well in these press conferences. It is no doubt reassuring to many Americans.

And take note: He is responding without a teleprompter.

(CNN) – President Obama used his first answer to critique the deregulation that was heavily promoted by both Democrats and Republicans in the 1980’s and 1990’s.

It's an argument that resonates with Main Street America.

(CNN) - I count 10 major initiatives on President Obama's agenda. Only two of them seem unpopular: bailing out the banks and the auto industry.

But nevertheless, most Americans say he is trying to do too much. His opening statement however clearly proves the president thinks every initiative is related.

Energy, healthcare, and education were all mentioned immediately. He wants Americans to think big picture.

[cnn-photo-caption image=http://i2.cdn.turner.com/cnn/2009/POLITICS/02/13/schneider.bipartisanship/art.obama.afp.gi.jpg caption="President Obama didn't find much bipartisanship over the stimulus bill or his pick for commerce secretary."]
WASHINGTON (CNN) - "It is time for Congress to act, and I hope they act in a bipartisan fashion," President Obama said when he went to Peoria, Illnois, on Thursday to argue for his economic stimulus plan.

Congress acted. But bipartisan? Not so much.

The plan passed the House of Representatives without a single Republican vote, and got only a token number - three - of Republican votes in the Senate.

"All the talk about bipartisanship that we have heard over the last several months went down the drain," House Republican leader John Boehner complained on Friday.

Obama also ran into a wall in his effort to build a bipartisan cabinet when his choice for Secretary of Commerce, Republican Sen. Judd Gregg, withdrew his name from nomination.

Illinois: Barack Obama's seat. Then-Gov. Rod Blagojevich, who had been arrested on a criminal complaint for attempting to sell the seat, defied the Senate and appointed former Illinois Attorney General Roland Burris. The Senate could find no legal way to block the appointment. Blagojevich was subsequently impeached and removed from office.

New York: Hillary Clinton's seat. Caroline Kennedy campaigned for the Senate and got some rough treatment by the New York media. She lost ground in the polls and ultimately withdrew from the race after becoming the target of anonymous attacks.

Schneider: A nod to the past, as the future takes the stage

WASHINGTON (CNN) - A dramatic moment - noting that 60 years ago, his father could not have been served in segregated Washington. Those of us who grew up in the segregated South understand the amazing significance of this moment. We have lived to see the day. 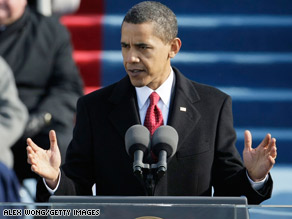 Schneider: Big goals, and a clear departure from the past

WASHINGTON (CNN) - The call to unity is very much Obama’s trademark –- reaching across barriers, ending "the recriminations and worn-out dogmas." That’s what he means by changing politics in Washington. And right away, he addresses some clear departures from the Bush approach. 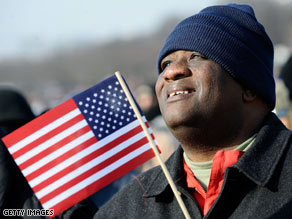 A man holds a flag as he watches the inauguration of Barack Obama as the 44th President of the United States of America.

The choice between safety and ideals is false, he says. Without a watchful eye, the market can spin out of control. There's a clear acknowledgment of the global warming crisis ("the way we use energy strengthen our adversaries and threaten our planet.")

He's one of the few modern Presidents who has reached out to "non-believers" as well as Christians, Muslims, Jews and Hindus.

"The world has changed, and we must change with it." His theme of "change" carried him through the campaign. Voters saw it as change from Bush. Now he is using it to call for big policy changes, calling this "a moment that will define a generation" - very much like Kennedy in 1961.

"Remaking America" - no small ambition, starting with the literal reconstruction of our infrastructure. He has "big plans" –- and a big crisis that can help him carry them through.

But still, there's an overriding realism. His answer to the old partisan debate: "The question is not whether our government is too big or small, but whether it works." It’s the pragmatist’s answer. Does it work?

[cnn-photo-caption image= http://i2.cdn.turner.com/cnn/2009/images/01/20/art.getty.inaug.crowds.jpg
caption="People all over the world are seeing America re-invent itself."]WASHINGTON (CNN) - This event is getting huge amounts of attention all over the world. I got e-mails about Obama clubs meeting in the Netherlands and Indonesia –- thousands of fans gathering. I spoke to a radio audience in South Africa.

This is truly the re-branding of America. People all over the world are seeing America re-invent itself.