Washington (CNN) - Eager to respond to criticism of his foreign policy approach to recent crises, from Syria to Ukraine, President Barack Obama will lay out his vision on Wednesday at the commencement at West Point for how the United States should apply force around the world.

"You will hear the President discuss how the United States will use all the tools in our arsenal without over-reaching," a White House official said.

END_OF_DOCUMENT_TOKEN_TO_BE_REPLACED

Washington (CNN) - President Barack Obama will announce plans Friday to nominate San Antonio Mayor Julian Castro to be his next secretary of Housing and Urban Development, a government source said.

"If you mean the specific allegations that I think were first reported by your network out of Phoenix I believe, we learned about them through the reports," White House press secretary Jay Carney said in reference to CNN's story on April 23.

END_OF_DOCUMENT_TOKEN_TO_BE_REPLACED

Obama, along with First Lady Michelle Obama, toured the museum Thursday morning before speaking at a dedication ceremony. The museum, which opens to the public next week, will house unidentified remains from the terror attacks, which has left some victims' families outraged.
END_OF_DOCUMENT_TOKEN_TO_BE_REPLACED 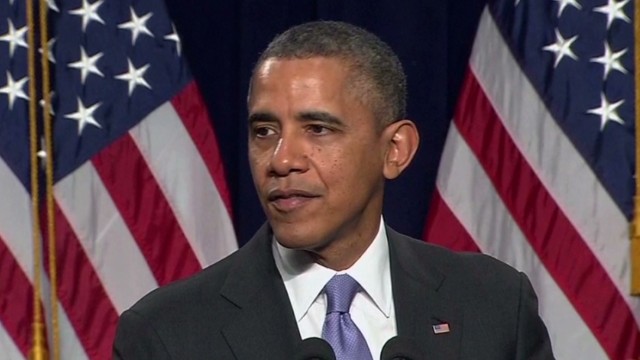 END_OF_DOCUMENT_TOKEN_TO_BE_REPLACED

(CNN) - President Barack Obama once again lamented the limits of his power on the world stage, expressing regret in a speech Wednesday night that he was unable to stop recent atrocities against children in Nigeria and Syria.

"I have this remarkable title right now - President of the United States - and yet every day when I wake up, and I think about young girls in Nigeria or children caught up in the conflict in Syria - when there are times in which I want to reach out and save those kids, having to think through what levers, what power do we have at any given moment" Obama said in a speech at the University of Southern California Shoah Foundation's gala in Los Angeles.

END_OF_DOCUMENT_TOKEN_TO_BE_REPLACED

Washington (CNN) - When it came to spreading the word about the government's alarming new report on climate change, senior advisers to President Obama thought who better to talk about extreme weather forecasts than meteorologists.

A senior administration official said the decision to bring in well-known weather forecasters from both national broadcast networks and local television stations for a series of interviews in the White House Rose Garden with the President was designed to avoid a debate over whether climate change is actually happening. Instead, the intended focus was to help communities prepare for the National Climate Assessment's predictions of droughts, heat waves, and severe storms that are on the way.
END_OF_DOCUMENT_TOKEN_TO_BE_REPLACED

At a joint news conference with Philippines President Benigo "Noynoy" Aquino, the President announced the U.S. will impose a new round of sanctions against Russia over the ongoing crisis in Ukraine.
END_OF_DOCUMENT_TOKEN_TO_BE_REPLACED