[cnn-photo-caption image= http://i2.cdn.turner.com/cnn/2008/POLITICS/10/10/bush.balancing.act/art.busheconomy.ap.jpg caption="President Bush will discuss the economy Friday morning in the White House Rose Garden."]
WASHINGTON (CNN) - President Bush has tried to strike an awkward balance between reassurance and reality about the nation's financial crisis. On Friday, he will do so again, but the repetition raises the question: to what effect?

Since September 15, the day financial giant Lehman Brothers failed, the president has commented on the nation's financial health 26 times, either through written, radio or on-camera statements.

White House Press Secretary Dana Perino says the president will let Americans know they "should be confident that every effort is being taken to stabilize our financial system."

Watch: Rescue plan will ' take a while,' Pres. Bush says

Perino also said Bush's speech at the White House Rose Garden is not expected to announce any policy decisions. In the past, Bush's statements have mostly been brief, as in Thursday's comments at the White House during a Hispanic Heritage Month celebration.

The president is due to deliver his speech Monday at the Republican National Convention in St. Paul, Minnesota. Perino said it will review "the major issues facing the country, from terrorism and war to the economy and the direction of our culture."

Perino added that in making the case for GOP presidential candidate Sen. John McCain's qualifications, the speech will reflect "on the role of the presidency and the qualities that are demanded by the job" of commander-in-chief.

"In particular, it highlights McCain's unique judgment, perspective and experience to deal with the unexpected, to stand firm on his convictions, put the country above himself and make hard decisions necessary to protect the American people," Perino said.

Despite less than five months left in President Bush's term, Perino said not to expect the speech to define his legacy.

"This is not an opportunity to recap accomplishments of the past seven and a half years," she said. "It will not serve as a farewell to the American people, and it certainly will not attack Barack Obama."

Asked why, Perino replied, "Because he's got class."

She added, "This president knows better than almost any politician in America what it's like to face criticism. He watched his dad as vice presidential candidate for two terms go through that, and then when his dad ran for president, he saw it again, and then in his own campaigns, the two national
elections. He knows what it's like in high political season, and he's not going to respond to every attack."

President Bush believes the McCain-Palin ticket is "very strong," and he looks forward to a "great victory in November," Perino also said.

HOKKAIDO, Japan (CNN) - It was a birthday celebration in the skies, as President Bush turned 62 aboard Air Force One while en route to Japan where Bush is attending the summit of the Group of Eight industrialized nations.

On the table was a "large" coconut cake with a single burning candle and the words "Happy Birthday President Bush" on it.

The crowd called out "surprise" as President Bush walked into the room and then sang Happy Birthday, Perino said.

Bush "dutifully pretended to be surprised" and blew out the candle, Perino said. It was not known whether he made a birthday wish.

After cutting and serving the cake, the health-conscious president ate a "small" piece of birthday cake, she said.

END_OF_DOCUMENT_TOKEN_TO_BE_REPLACED

Bush says he will press other leaders of the Group of Eight industrialized nations to follow through on their commitments from earlier summits, but has warned there is nothing he or anyone else can do in the short term about oil prices.

He continued to advocate more drilling in currently protected areas of the U.S. as a medium-term fix for skyrocketing fuel costs.

"Ultimately, of course, we're going to transition away from hydrocarbon. But we're now just in a transitional period and we need more oil to be able to do so," he said.

"What's essential in this summit for George W. Bush is to make sure the world economy does not spin downward," he said.

Yet Bush is not raising expectations about what he and the other G-8 leaders can realistically accomplish on the economic front. "One thing we need to make clear when I'm with our partners is that we're not going to become protectionists; that we believe in free trade and open markets," he said Wednesday.

A former administration official who served on the National Security Council under Bush says the G-8's purpose is not to come up with quick solutions.

END_OF_DOCUMENT_TOKEN_TO_BE_REPLACED

His victory - which sets him up to become the first African-American to lead a major party ticket in the race for the White House - shows how far America has come, Perino said.

She said President Bush, a Republican, did not plan to call Obama to congratulate him personally. 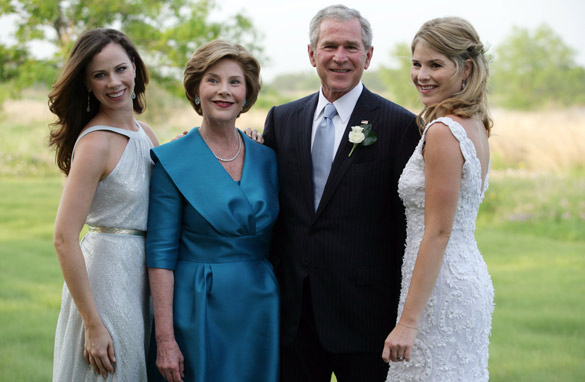 WASHINGTON (CNN) - Against the backdrop of a stunning Texas sunset, near a lake on the Bush family's 1,600-acre ranch, President Bush walked his daughter, Jenna, down the aisle to her groom, the White House said.

"The wedding was spectacular. It was all we could have hoped for," the president said Sunday before boarding Air Force One.

Wearing a white silk organza Oscar de la Renta gown, the bride stood with the groom before a beige-colored cross and altar made of Texas limestone.

"I had to face some very difficult spending decisions and I've had to conduct sensitive diplomacy. That's called planning for a wedding," Bush told the Hispanic Chamber of Commerce on March 12.

The plans are largely under wraps, but they call for gathering by a lake in front of an altar and four-foot high cross made from Texas limestone.

"This is the time when the wildflowers are all blooming. And I think it will be a very, very lovely wedding, and it will be very like Jenna and Henry," first lady Laura Bush recently said.

Jenna Bush told CNN's Larry King on April 24 that the wedding will include "all relatives, our families, really, kind of big. So it's half-family and then half-very close friends." More wedding details »

Not all of her friends will be on hand though. 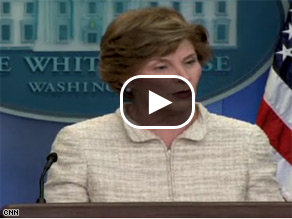 WASHINGTON (CNN) - First Lady Laura Bush has spoken out before on Myanmar – mostly through written statements – but Monday's on-camera mini-news conference in the White House briefing room was a first. In the wake of Saturday's deadly cyclone in Myanmar - also known as Burma - Mrs. Bush did not mince words decrying the ruling military junta for its failure to adequately warn residents of the impending danger.

"The response to the cyclone is just the most recent example of the junta's failure to meet its people's basic needs," Mrs. Bush said.

Officials say Mrs. Bush decided to push up her appearance, in light of the deadly cyclone over the weekend.

END_OF_DOCUMENT_TOKEN_TO_BE_REPLACED

House Judiciary Committee leaders said it is "imperative" that Rove answer allegations that he pressed the Justice Department to investigate Siegelman, a Democrat who when indicted was preparing a rematch against Alabama's Republican governor in 2006.

"We look forward to scheduling an early date for your voluntary appearance," the committee's Democratic leaders wrote in a letter released Thursday.

Rove's lawyer, Robert Luskin, said Thursday that President Bush's onetime political mastermind "absolutely denies he was in any way involved in the decision to prosecute Don Siegelman." Luskin said he has had no direct communication the the Judiciary Committee's staff or its chairman, Rep. John Conyers, D-Michigan, and said the White House would have to decide whether Rove will be able to testify.