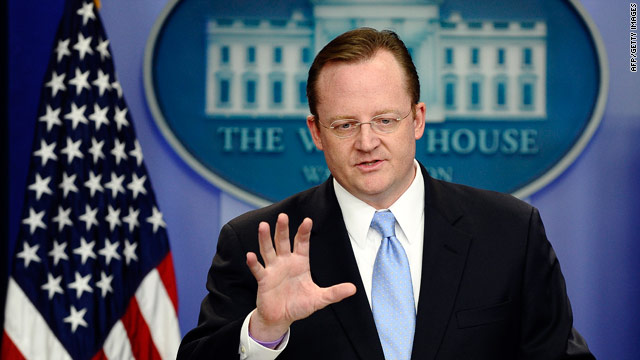 Gibbs was Obama's spokesman during the 2008 presidential campaign.

Washington (CNN) – The White House is putting on a brave face in the midst of a congressional revolt, led by its own party, against the president's tax-cut deal.
In the latest move by angry Democrats, House lawmakers are refusing to bring Obama's controversial tax bill to the floor. As some political observers saw all legislative hell breaking out, the White House continued to make painstaking efforts to paint a rosy picture.

As the news of the Democratic blockage broke on Capitol Hill, the spinning over the course of an hour at 1600 Pennsylvania Ave. could make you dizzy.

Former Army Lt. Dan Choi, the Iraq war veteran and West Point graduate who has become the face of the movement to remove the ban, led the midday protest on the opening day of the lame-duck session of Congress, to put pressure on Democrats and the president to jettison the law before January.

Washington (CNN) - President Obama is readying for what the news media are now calling the "Slurpee summit." Following a post-election sit-down with his Cabinet Thursday, President Obama said he called Republican leaders Rep. John Boehner and Sen. Mitch McConnell, and Democratic leaders Rep. Nancy Pelosi and Sen. Harry Reid to come to the White House November 18th - at the start of the congressional "lame duck" session - for talks.
END_OF_DOCUMENT_TOKEN_TO_BE_REPLACED

"As for me, it's come to this," Mrs. Bush said of her life after eight years in the White House, placing the doll on the glass plate. "This is the Laura Bush bobble head doll. I got this from a friend of mine who found it in the gift shop in the constitutional center a few weeks after the election. It was on the clearance shelf. He said he couldn't resist sending it to me, I told him he could have tried a little harder. But I'm kinda glad to have it."
END_OF_DOCUMENT_TOKEN_TO_BE_REPLACED

First lady gets candid out West

Los Angeles, Calif. (CNN) - A surprisingly candid first lady Michelle Obama discussed her initial fears about going out on the campaign trail alone to promote her husband's 2008 presidential bid in remarks before a women's conference in Long Beach Tuesday.

"I was scared. I was worried that I'd say that wrong thing. I was nervous that someone might ask a question that I didn't know the answer to. I have a tendency to do that thing that a lot of women do, where you get 99 things right, but spend all your time beating yourself up about the one thing you messed up."
END_OF_DOCUMENT_TOKEN_TO_BE_REPLACED

The Backstory: How Obama got into the Clubb house

Des Moines, Iowa (CNN) - You ever wonder how families are selected to host President Obama's personal visits? It might all come down to your backyard.

Sandy and Jeff Clubb, a university athletic director and a local private school teacher, were chosen to host the president in Des Moines, Iowa, as part of the White House's series of informal discussions on the economy leading up to the midterm elections.

I met the Clubbs in their driveway at 4:30 a.m. Wednesday. It was still dark outside. I was among a small group of reporters in the first wave to arrive before the president's entourage.

MADISON, Wisconsin (CNN) - "I'm fired up and ready to go!" President Barack Obama yelled after casually walking on stage at the University of Wisconsin at Madison Tuesday. The overwhelmingly student crowd cheered happily but without the wild excitement they gave candidate Obama two years ago.

Obama looked visibly older and grayer since his February 2008 campaign rally here just a week before the presidential primary. He appeared slightly tired on his second day of travel, after arriving from a backyard discussion with voters in Albuquerque, New Mexico.

"Change is going to come! If we work for it! If we fight for it!" Obama cried defiantly.

White House aides billed this Democratic National Committee rally as an opportunity for the president to re-energize the base, to recapture the energy and magic that young voters brought to the Obama campaign. DNC officials estimated 15,000 would pack the mall across from the campus library. About 17,000 filled UW's Kohl Center in 2008.

END_OF_DOCUMENT_TOKEN_TO_BE_REPLACED

Obama questioned on abortion, why he is a Christian

Albuquerque, New Mexico (CNN) - An event billed as a discussion on the economy turned personal Tuesday when a woman asked President Barack Obama about his Christian faith and views on abortion.

The question came at a town hall-style meeting in the yard of an Albuquerque home as part of Obama's public outreach to explain his policies and campaign for Democrats in the November congressional elections.

With a recent survey showing that only a third of Americans can correctly identify Obama as a Christian, the president gave a personal account of his conversion as an adult and how his public service is part of his faith.