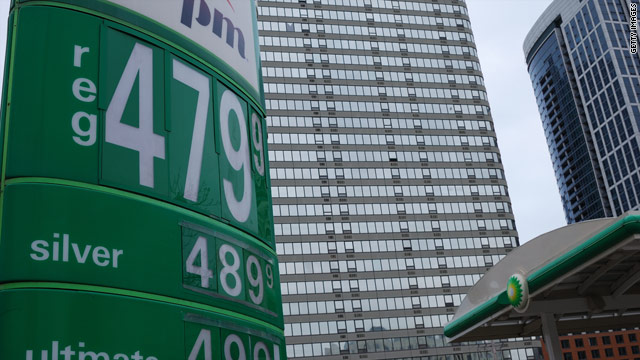 New York (CNNMoney) - The high price of gas is forcing many Americans to change their travel plans for the Memorial Day weekend, according to a survey released Friday.

A CNN/Opinion Research poll showed that one in four adult Americans have altered their plans for this weekend because of high gas prices, and more than half say they have changed their overall vacation plans.

New York (CNNMoney.com) - A Congressional watchdog group said Tuesday that U.S. banks should undergo stress tests to determine whether or not they have enough money to absorb losses that could stem from investigations into their foreclosure processes.

The Congressional Oversight Panel, created by Congress in 2008 to review the Treasury Department's response to the financial crisis, issued a 125-page report detailing recent allegations that banks and loan servicers filed thousands of inaccurate documents in foreclosure cases across the country.
FULL STORY

New York (CNNMoney.com) - President Obama said Monday that his economic policies helped prevent a depression, although he acknowledged that many Americans are still struggling.

In a town hall meeting sponsored by the CNBC cable network, Obama responded to questions from unemployed workers, recent college graduates, small business owners and one prominent hedge fund manager. He sought to reassure middle class families that the American dream is still attainable, while at the same time rebutting criticism that he is anti-business.

The meeting came on the same day that the National Bureau of Economic Research said the Great Recession, which began in December 2007, officially ended in June 2009.

However, economists are debating whether the U.S. economy is headed for another downturn, a so-called double-dip recession.