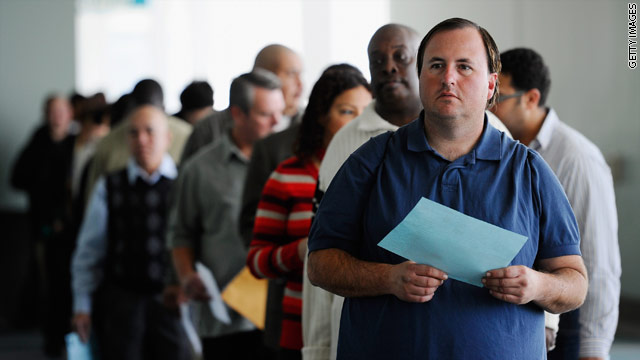 There were 400,000 initial unemployment claims filed in the week ended July 30, the Labor Department said Thursday, down 1,000 from an upwardly revised 401,000 the prior week. Economists surveyed by Briefing.com were expecting jobless claims to rise to 405,000.

New York (CNNMoney) - The number of Americans filing either continuing or first-time claims for unemployment benefits fell last week, a sign that the job market continues to slowly improve.

The number of Americans filing for ongoing claims dropped 80,000 to 3,706,000 in the week ended March 5, the most recent week available. That was the lowest number of continuing claims since September 2008, and below economists' forecast for 3,750,000 continuing claims.

Bernanke: Fed has tools to get economy on track

"The issue at this stage is not whether we have the tools to help support economic activity and guard against inflation," Bernanke said at the Fed annual symposium in Jackson Hole, Wyo. "We do."

Making his first public comments since the central bank announced it would buy additional long-term Treasurys to boost the recovery, Bernanke said that the pace of economic growth is "less vigorous" than expected, but the preconditions for a pickup in 2011 remain in place.

One part of the plan, announced Wednesday, includes a new $1 billion program that will offer loans to unemployed borrowers at risk of losing their homes. The loans, which will be dispersed through nonprofit and housing agencies, will carry 0% interest and be good for a maximum of $50,000 for up to two years.

The government's department of Housing and Urban Development said it will announce details about the program, coined the Emergency Homeowner Loan Program, in the coming weeks.

Bernanke sees 'moderate growth,' but a long road to recovery

Speaking to politicians attending the annual meeting of the Southern Legislative Conference in Charleston, S.C., Bernanke said the nation's economy is growing at a "moderate" pace, but has a "considerable way to go to achieve a full recovery."

The Fed chief also focused on the way that the downturn has taken a severe toll on state and local budgets, forcing them to make significant cuts that are in part to blame for the sluggishness of the national recovery.

New York (CNNMoney.com) - House lawmakers on Thursday approved a $6 billion measure that aims to provide rebates to homeowners who invest in energy efficiency improvements - but not without a fight from Republicans.

The bill, officially known as the Home Star Energy Retrofit Act but better known as "cash for caulkers," has been touted by President Obama since February as one of the signature pieces of his administration's larger job-creation strategy.

The act "is a common-sense bill that will create jobs, save consumers money, and strengthen our economy," President Obama said after the House passed the measure. "We have workers eager to do new installations and renovations, and factories ready to produce new energy-efficient building supplies."

New York (CNNMoney.com) - President Obama plans to nominate three new governors to the Federal Reserve on Thursday, according to sources familiar with the matter.

San Francisco Federal Reserve Bank President Janet Yellen is expected to be nominated as vice chairman of the central bank. And the two vacancies on the seven-member board would be filled by Sarah Raskin, the Maryland Commissioner of Financial Regulation, and Peter Diamond, a professor at the Massachusetts Institute of Technology.

White House press secretary Robert Gibbs said last month that the three were under consideration for the board positions.

33 states out of money to fund jobless benefits

New York (CNNMoney.com) - With unemployment still at a severe high, a majority of states have drained their jobless benefit funds, forcing them to borrow billions from the federal government to help out-of-work Americans.

A total of 33 states and the Virgin Islands have depleted their funds and borrowed more than $38.7 billion to provide a safety net, according to a report released Thursday by the National Employment Law Project. Four others are at the brink of insolvency.

Debt-challenged California has borrowed the most, totaling more than $8.4 billion, followed by Michigan and New York, which have loans worth more than $3 billion. Nine other states have borrowed at least $1 billion from the federal government.

Last month, President Obama unveiled the Hardest Hit Fund, which pumped $1.5 billion into state housing agencies in California, Arizona, Florida, Nevada and Michigan. These five were originally identified because they had been hardest hit by the housing bust, with prices declining more than 20%.

Now, an additional $600 million is being doled out to the five states that have the largest number of counties suffering unemployment rates above 12%: North Carolina, Ohio, Oregon, Rhode Island and South Carolina.

"The goal for our second set of awards was to identify states suffering from high shares of populations living in concentrated areas of economic distress," said Alan Krueger, Treasury assistant secretary.

Bernie Sanders, I-Vt., issued a statement late Wednesday saying he will prevent Bernanke's nomination by placing a hold, an informal practice by which a senator informs the majority leader that he does not wish a particular measure to reach the floor for a vote.

"The American people overwhelmingly voted last year for a change in our national priorities to put the interest of ordinary people ahead of the greed of Wall Street and the wealthy few," said Sanders, one of Bernanke's sharpest critics, in a statement. "What American people did not bargain for was another four years for one of the key architects of the Bush economy."

Sanders said Bernanke, who took the helm of the Fed in 2006, could have averted the financial crisis in several ways, but failed at "core responsibility of the Federal Reserve" and thus "it's time for him to go."

Among the litany of reasons he cited for his move, the statement from Sanders' office noted that unemployment had more than doubled under Bernanke's watch and more than 120 banks have failed since he became chairman.

Majority leader Sen. Harry Reid, D-Nev., would not need to recognize Sanders' hold, but Sanders could filibuster the motion to nominate the Fed chairman for another 4-year term.

A spokesman for Senator Reid would not comment on the hold by Sanders.