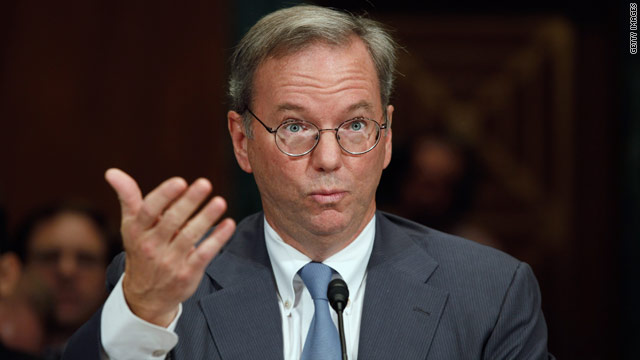 New York (CNNMoney) - Google booked record sales and earnings in the first half of this year, made a series of splashy acquisitions, and is on a hiring spree.

But in the eyes of Google chairman Eric Schmidt, the company is fighting for its survival.

NEW YORK (CNNMoney.com) - The Congressional Budget Office hiked its forecast Tuesday for how much the stimulus bill will add to the nation's deficit, raising its estimate by $75 billion to $862 billion.

The American Recovery and Reinvestment Act, passed in February 2009, was initially believed to have a price tag of $787 billion. With the glaring exception of skyrocketing unemployment compensation costs, the CBO said the Recovery Act's effects on government spending and revenues have closely followed its initial estimate for 2009 and 2010.

The vast majority of the increased deficit impact is linked to anticipated spending in 2011 to 2019. It now appears to the Budget Office that stimulus will have a larger impact on the deficit in the years to come based on changing economic factors since the bill was signed into law 11 months ago.

But what does that mean exactly? Have that many people been hired? Here's a quick guide to understanding just what those numbers mean:

1) How are the jobs calculated? It isn't as simple as "one person hired equals one job created," or even "one person retained equating to one job saved."

The government instructed stimulus recipients to report jobs created or saved as "full-time equivalents." If that sounds complicated ... it is.

END_OF_DOCUMENT_TOKEN_TO_BE_REPLACED

White House fights back on Cash for Clunkers

[cnn-photo-caption image= http://i2.cdn.turner.com/cnn/2009/images/10/29/cashforclunkers.jpg caption="White House fights back on Cash for Clunkers."]
NEW YORK (CNNMoney.com) - The Obama administration on Thursday lashed out at a prominent critic of its Cash for Clunkers program, arguing that the popular trade-in initiative helped give the auto industry and the economy a much needed boost in the past few months.

In a blog post on whitehouse.gov, the administration argued that a report on Clunkers by automotive Web site Edmunds.com "doesn't withstand even basic scrutiny" and is based on "implausible assumptions."

On Wednesday, Edmunds.com released a study that argued Cash for Clunkers did not have a great impact on the auto industry. The report said that 690,000 new vehicles were sold under the program last summer, but that only 125,000 of them would not have been sold without the Clunkers rebates.

As a result, the report said, the administration's economic claims for the program "have been rendered quite weak."

[cnn-photo-caption image= http://i2.cdn.turner.com/cnn/2009/images/10/09/art.obama1005.gi.jpg caption="Palin argues against the president's health care proposals in a new Op-Ed."]
NEW YORK (CNNMoney.com) - President Obama on Friday made his strongest push yet for the creation of a new consumer protection agency, lashing out against those who have lobbied hard to stand in its way.

The Obama administration sent Congress its proposal for a Consumer Financial Protection Agency in late June. The proposal has been met with disdain from banks and big business.

"They're doing what they always do - descending on Congress and using every bit of influence they have to maintain a status quo that has maximized their profits at the expense of American consumers," Obama said in televised remarks made at the White House. "That's why we need a Consumer Financial Protection Agency that will stand up not for big banks and financial firms, but for hardworking Americans."

Banks succeeded last month in stripping out of the bill a provision that would have required banks and others to offer uncomplicated financial products, like easy-to-understand applications for 30-year-fixed mortgages, as alternatives to more complex ones.

END_OF_DOCUMENT_TOKEN_TO_BE_REPLACED

Obama: 'Storms are beginning to break'

NEW YORK (CNNMoney.com) - The bailouts have largely stabilized the financial system, but regulatory reform is needed to prevent another similar crisis from happening again, said President Obama in a speech delivered Monday on Wall Street.

Marking the anniversary of the Lehman Brothers collapse, which set off a series of events that led to last fall's financial crisis, Obama talked about the state of the economy one year later.

"Although I will never be satisfied while people are out of work and our financial system is weakened, we can be confident that the storms of the past two years are beginning to break," said Obama. "In fact, while there continues to be a need for government involvement to stabilize the financial system, that necessity is waning."

Taxpayers have lent hundreds of billions of dollars to systemically significant financial institutions and trillions more in lending programs aimed at easing the tight grip on lending. Obama said bailout money is flowing back to taxpayers, but "that doesn't mean taxpayers will escape the worst financial crisis in decades unscathed," he said.