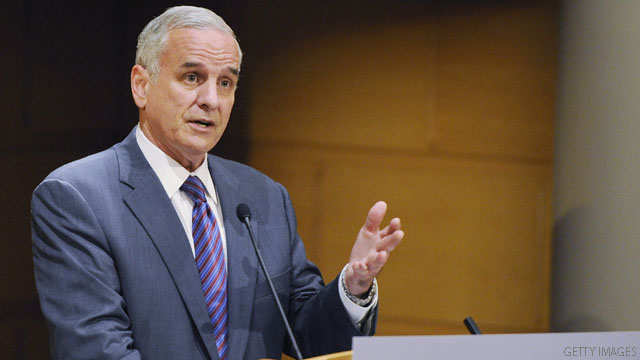 Minnesota shutdown nearer to an end

NEW YORK (CNNMoney) - It's almost over.

Minnesota lawmakers will take up the state budget Tuesday afternoon, the latest step in ending the nation's longest government shutdown in recent years.

Lawmakers will vote on 12 bills that were drawn up in accordance with the budget deal that Governor Mark Dayton and Republican legislative leaders reached last Thursday.

NEW YORK (CNNMoney.com) - Balancing state budgets these days is tough enough. But more than a dozen governors have promised to do it without raising taxes.

These state chiefs, nine of whom were elected two weeks ago, will have little choice but to slash spending in order to bring their budgets in line, experts say. All of them are Republican, save for New York's Gov.-elect Andrew Cuomo.
FULL STORY

Freddie and Fannie won't pay down your mortgage

Fannie Mae and Freddie Mac, which are controlled by the federal government, do not lower the principal on the loans they back, instead opting for interest rate reductions and term extensions when modifying loans.

But their stance is out of synch with the Obama administration, which is seeking to expand the use of principal writedowns. In late March, it announced servicers will be required to consider lowering balances in loan modifications.

And just who would tell Fannie and Freddie to start allowing principal reductions? The Obama administration.

END_OF_DOCUMENT_TOKEN_TO_BE_REPLACED

9% of late home loans get help

That translates into 235,247 loans that were at least 60 days delinquent at the 38 loan servicing firms participating in the program. Institutions have extended modification offers to 406,542 troubled borrowers, or 15% of those behind in payments.

Under fire for the program's rocky start, the Obama administration says it is on pace to help up to four million homeowners over the next three years. The initiative was announced in February and the first institutions to join began accepting applications in April.

Tuesday's report come a week after the administration called servicers to Washington, D.C., to discuss ramping up the program's implementation afterhearing a flood of complaints from borrowers. Officials want to see 500,000 loan modifications under way by Nov. 1.

[cnn-photo-caption image= http://i2.cdn.turner.com/cnn/2009/images/04/10/art.getty.money.jpg caption="states are poised to pass as much as $24 billion in tax and fee hikes in coming weeks."]

NEW YORK (CNNMoney.com) – States are poised to pass as much as $24 billion in tax and fee hikes in coming weeks, as they struggle to balance their budgets amid the worst economic downturn since the Great Depression, a report released Thursday found.

The spike blows away the $726 million in recommended increases for fiscal 2009.

At the same time, state budgets are set to shrink for a record second year in a row. The recession has caused tax collections to plummetandthe need for social services to soar. State officials are scrambling to close last-minute budget gaps that opened after April tax revenues came in below already-lowered estimates. States may be forced to tap rainy day funds or impose even more stringent spending cuts to balance their budgets before their fiscal years end on June 30.

Governors' proposed budgets for fiscal year 2010 show a 2.5% decrease in general fund spending, which comes after an estimated 2.2% decline in the current fiscal year,

This is the largest pullback in the survey's 30-year history and the first time state spending would decline for two years in a row, according to
the National Governors Association and the National Association of State Budget Officers. General fund spending, which is not earmarked for specific uses, covers mainly education, Medicaid, corrections, public assistance and transportation.

Some 29 states are recommending tax and fee increases for the coming fiscal year.

California, which is struggling to close a $21.3 billion budget gap, accounts for $11.3 billion of the hike. Illinois makes up another $4.4 billion, while New York is proposing $4 billion in additional levies.
END_OF_DOCUMENT_TOKEN_TO_BE_REPLACED