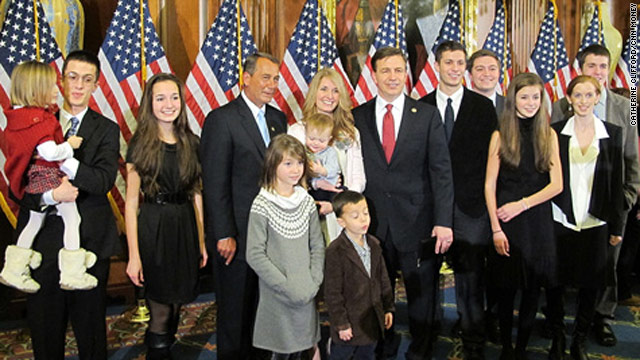 Washington (CNNMoney) - At the open house gathering to celebrate the official swearing in to Congress of Rep. Bobby Schilling in Washington, D.C., the pizza and ice cream were shipped in from Illinois.

The pizzas came in overnight from Saint Giuseppe's Heavenly Pizza, the shop that Bobby Schilling has owned for 14 years in Moline, Ill. Before deciding to run for Congress, Schilling was a pizza man. And lucky for supporters, there are pizza ovens in the historic D.C. office building, so the pizza was hot.

The bill passed a key test vote 61 to 37. A final vote is expected later this week. If the bill does pass a final Senate vote, it would still have to go back to the House of Representatives before it could hit the President's desk.

The measure is expected to create 500,000 jobs, according to a summary of the bill from the Senate.

The House passed its own version of the bill nearly three months ago. But the bill met opposition in the Senate. President Obama has been lobbying really hard to push the Senate to move on the bill.

Their goal: Help small business, and boost the economy. The Senate will consider two proposals right off the bat.

The broader measure is the Small Business Jobs Act, which includes a $30 billion fund to spur lending and $12 billion worth of tax breaks. The Senate will also decide whether to repeal a law enacted as part of health care reform that will require small businesses to file millions of new tax forms - a provision a top Republican calls "job killing."

Main Street needs the help: Credit remains hard to come by, and without it hiring is suffering. In fact, small business hiring has been on a downward slide for the past two and a half years.

Lawmakers to BP: Put up $20 billion

NEW YORK (CNNMoney.com) - BP: Kick up $20 billion to pay for the recent oil spill in the Gulf region. And make it snappy.

That's the message Senate majority leader Harry Reid and members of the Senate Democratic Caucus sent to BP CEO Tony Hayward in a letter on Monday.

"Establishment of this account would serve as an act of good faith and as a first step towards ensuring that there will be no delay in payments or attempt to evade responsibility for damages," the letter said.

But it maybe hard for BP to comply: The London-based company only had about $7 billion in cash as of March 31, according to its most recent financial statement. And the oil giant is scheduled to pay out dividends on June 21 - although it is holding a board meeting Monday to discuss the matter.

Main Street frustration: 'Everything is going to banks'

Small companies employ around half of America's workers and drive most of the country's job growth. Obama talks frequently in his speeches about the vital role small companies play, and his administration has launched several efforts to bolster struggling Main Street businesses. But most of the president's small business proposals remain in limbo, caught in bureaucratic logjams and the Great Black Hole of Congress.

A year ago, Obama set the stage during his first major economic speech to Congress. "I will not spend a single penny for the purpose of rewarding a single Wall Street executive, but I will do whatever it takes to help the small business that can't pay its workers or the family that has saved and still can't get a mortgage," Obama said in February. "That's what this is about. It's not about helping banks; it's about helping people."

But small business owners across the nation say they feel left out of the stimulus and recovery action.

Uncle Sam is $1 trillion in the hole

NEW YORK (CNNMoney.com) - The federal budget deficit increased in June as spending surged and tax receipts sunk, pushing the total budget shortfall to over $1 trillion in the first 9 months of the fiscal year, according to a government report released Monday.

The Treasury Department said the June deficit was $94.3 billion, a reversal of fortune from the $33.5 billion surplus the government managed in June 2008. In May, the deficit was $189.7 billion.

Economists surveyed by Briefing.com had forecast a budget deficit of $97 billion. The Congressional Budget Office had also forecast a $97 billion shortfall last month.

The deficit was the largest shortfall the government has ever recorded in the month of June, and the first time it has come up short in June since 1991, according to a Treasury official. The largest monthly deficit on record was February 2009, when the government increased its shortfall by $193.9 billion.

For the first nine months of the fiscal year, which began in October, the total deficit hit $1.09 trillion.

Spending surging, income shrinking: The government has been spending at a breakneck pace to slow the deceleration of the economy in the current recession. At the same time, tax revenue from companies and individuals has declined, adding to the shortfall.

So far in fiscal 2009, the government has spent $2.67 trillion, but it has only taken in $1.59 trillion.
END_OF_DOCUMENT_TOKEN_TO_BE_REPLACED

[cnn-photo-caption image= http://i2.cdn.turner.com/cnn/2009/images/04/10/art.getty.money.jpg caption="The government has been spending at a record pace recently in an effort to pull the economy out of recession, jumpstart lending, and recapitalize the nation's financial system."]NEW YORK (CNNMoney.com) – The government said Friday the federal budget deficit for the first half of fiscal 2009 jumped to $956.8 billion, more than $500 billion above the gap for all of the prior fiscal year.

The Treasury Department said the federal budget deficit grew by $192.3 billion in March, according to the report released Friday.

Economists were expecting the budget deficit to grow by $160 billion in March, according to a consensus estimate compiled by Briefing.com.

The government has been spending at a record pace recently in an effort to pull the economy out of recession, jumpstart lending, and recapitalize the nation's financial system.

The Nikkei, the major index for the Tokyo Stock Exchange, rose 2.8 percent in early trading. The Hang Seng index in Hong Kong surged almost 6 percent at its open. The Australian All Ordinaries index was up nearly 2 percent.

Watch: A turning point in history

Americans turned out in record numbers to cast their votes for Democrat Barack Obama and Republican John McCain. At 11 p.m., CNN projected Obama as the winner over McCain in the electoral college.

"From the world perspective, Obama is perceived as a better candidate and I think they are voting with their dollars," said Jack Ablin, chief investment officer at Harris Private Bank in Chicago.