(CNN) - A former Environmental Protection Agency executive was sentenced to 32 months in prison on Wednesday for defrauding the government in what the judge called an "unbelievably egregious" scheme to steal taxpayer funds.

John C. Beale spent a decade milking the EPA for unearned pay and perks using a series of increasingly complicated lies, including that he was secretly working for the CIA.
END_OF_DOCUMENT_TOKEN_TO_BE_REPLACED 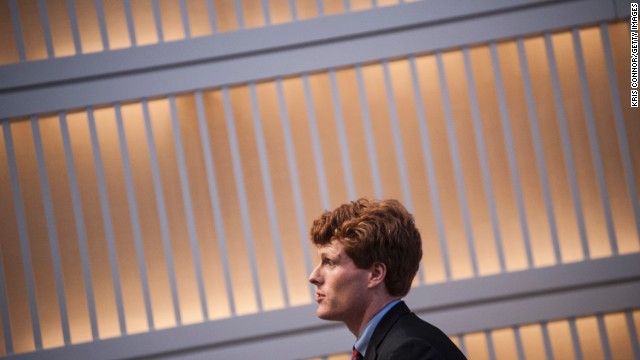 The freshman Democratic congressman from Massachusetts is among six activists who will replace current members of the "Fast for Families" group, many of whom are too weak to continue after 22 days of foregoing any sustenance except water. The group has been camped out on the National Mall  to protest the lack of progress on immigration measures pending in the House.
END_OF_DOCUMENT_TOKEN_TO_BE_REPLACED

First lady tells students: ‘My story can be your story’

Obama, along with Education Secretary Arne Duncan, visited a Washington high school on Tuesday to announce a new initiative to encourage students to go to college, calling improving access to higher education “one of [her] husband’s most important goals as president.”
END_OF_DOCUMENT_TOKEN_TO_BE_REPLACED

“Promoting the right to vote, guaranteeing marriage equality, treating immigrant people with respect and with dignity, these things are also things that make Maryland stronger and more competitive economically,” O’Malley told a forum at the left-leaning Center for American Progress.
END_OF_DOCUMENT_TOKEN_TO_BE_REPLACED

“This should be vetoed. It is an atrocity. It is a threat to our future,” Gore said during a speech at a policy forum held by the left-leaning Center for American Progress.
END_OF_DOCUMENT_TOKEN_TO_BE_REPLACED

“I wanted just to come here this afternoon…to reflect on the damage that events like the one we’ve just been through can do to the esteem in which the U.S. is held in the world, a key component of our national power,” Kerry said at a Center for American Progress forum.
END_OF_DOCUMENT_TOKEN_TO_BE_REPLACED

During impassioned remarks at a forum sponsored by the left-leaning Center for American Progress, Brown recounted how the story of a young man’s frightful childhood journey across the border convinced him of the need for immediate action.
END_OF_DOCUMENT_TOKEN_TO_BE_REPLACED

But, she added, Edward Snowden’s leak of details on the controversial spying program has been “very, very damaging” to US interests.
END_OF_DOCUMENT_TOKEN_TO_BE_REPLACED

Pelosi urges Clinton to run in 2016

(CNN) – The top Democrat in the House is urging Hillary Clinton to run for office, and says their party is already coalescing around the potential 2016 candidate.

CNN: Police are back at Hernandez home

Police on Thursday night were back at the Massachusetts home of former NFL player Aaron Hernandez, according to a law enforcement source with knowledge of an ongoing investigation into an unsolved 2012 double homicide in Boston. Hernandez, who is being investigated in connection with that 2012 case, is accused of orchestrating the killing of a man whose body was found last week less than a mile from Hernandez's home. Massachusetts State Police late Thursday said they were seeking a man as an "accessory after the fact" in the death of Odin Lloyd, who was found less than a mile from the home of former NFL tight end Aaron Hernandez. A North Attleboro Police Department tweet linked to a poster that described Ernest Wallace as being armed and dangerous. In most states, accessory refers to aiding someone suspected of committing a felony. Hernandez is charged with first-degree murder in the Lloyd case.