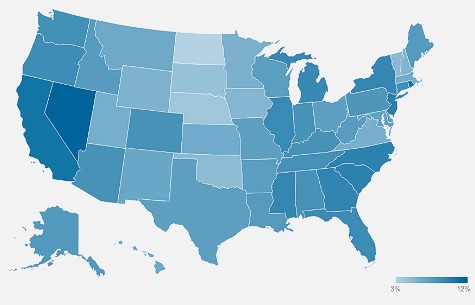 New York (CNNMoney) - Unemployment declined in 41 states in September, seven of which are key battlegrounds in the election. But falling unemployment rates don't necessarily point to improvement.

Ohio, which has 18 electoral votes up for grabs, saw its unemployment rate decline to 7% in September, down from 7.2% just a month earlier. While hiring has picked up slightly in the state, unemployment is mostly falling for the wrong reasons.

(CNN) - The U.S. recovery has hit a speed bump this year, slowing significantly in the first half of 2012.

But that didn't seem to get the White House down. The Obama administration released surprisingly upbeat economic forecasts Friday, when it revised the President's budget to include recent data.

The economy gained just 18,000 jobs in the month, the government reported Friday, sharply missing most expectations and coming in even weaker than the paltry 25,000 jobs added in May. Economists were eagerly awaiting this month's report, following a dismal report from May that originally showed a gain of just 54,000 jobs.