Politician who tells president to 'shove it' is a no-show

Woonsocket, Rhode Island (CNN) - It isn't very often that a chair at a President Obama event garners much attention.

But at a Woonsocket, Rhode Island manufacturing plant on Monday, it was the seat, and the politician who wasn't in it, that ended up in the spotlight.
END_OF_DOCUMENT_TOKEN_TO_BE_REPLACED

Washington (CNN) - President Obama has been known to occasionally criticize the Bush administration, but he's rolling out the red carpet for a member of the former President's Cabinet.

On Friday, Mr. Obama is scheduled to sit down in the Oval Office with former Secretary of State Condoleezza Rice.

END_OF_DOCUMENT_TOKEN_TO_BE_REPLACED

A world stage with a domestic backdrop

New York (CNN) - President Obama's address to the United Nations covered a lot of ground, but the Mideast peace process dominated his remarks.

Obama delivered 1,082 words on the subject, as he issued an urgent appeal for all nations to help push the peace process across the finish line.

According to Mideast expert Aaron David Miller, this heavy focus demonstrates the Obama administration's deep desire to see a breakthrough on its watch.

END_OF_DOCUMENT_TOKEN_TO_BE_REPLACED

He is an aggressive political animal who has been known to punctuate his arguments with the F-bomb. Most agree it's not because he's an angry man - it's just part of his foul-mouthed repertoire.

Emanuel's colorful reputation is regularly the subject of Obama's quips. Obama joked at the White House Correspondents Dinner this year that Mother's Day was a difficult holiday for Emanuel because "he's not used to saying the word 'day' after 'mother.' "

But there's so much more to Rahm than his mouth.

Racine, Wisconsin (CNN) –President Obama loves to tell audiences across the country that he enjoys getting away from Washington.

At a town hall meeting in Racine, Wisconsin Wednesday, it was no different.

"It's just nice to get out of Washington, I love Washington but I have to tell you, you know, it's good to escape the heat and hot air," Obama said.

It's not just the 90-degree temperatures Obama was referring to, but the heated political climate that's been intensified by the upcoming midterm elections.

END_OF_DOCUMENT_TOKEN_TO_BE_REPLACED

Washington (CNN) - Executive producers Tom Hanks and Steven Spielberg and their wives joined President Barack Obama and his family at the White House movie theater Thursday for a private screening of their new HBO series, "The Pacific."

But before returning to Hollywood, the Oscar-winning Hanks took time to come by the White House Briefing Room to check on his coffee maker.

Back in 2004, when Hanks was visiting the White House with his family over the Memorial Day weekend, he was surprised to find working journalists toiling without the aid of a simple coffee pot. He had an espresso machine delivered a short time later, and the machine has remained in service ever since, despite an extensive briefing room renovation and a brand new administration.

Hanks, who did most of the talking during his press room stop, seemed pleased his gift was still delivering the caffeinated goods. But he also expressed disdain at its condition and lack of upkeep.

The Hollywood heavyweight promised fawning press gathered around him a speedy delivery on a brand new model.

"Let me see what I can do for the poor slobs of the fourth estate," he said. 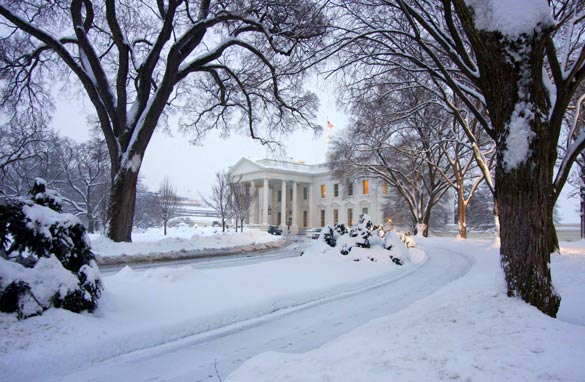 Washington (CNN) - While the federal government is officially closed Wednesday, the White House never really shuts down. But because of unprecedented snow and an early morning blizzard warning, even this weather is keeping many West Wing employees homebound.

According to Deputy White House Communications Director Jen Psaki, "thanks to modern technology many people are working from home," including one senior administration official who was providing information on health care reform from the warmth and safety of his house. But Psaki is quick to add that the administration has "a stalwart crew in parkas and snow boots at the White House as well."

Stalwart indeed. Psaki herself was overheard talking about making the trek to the White House on foot from Adams Morgan, and journalists covering President Obama also walked miles or spent the night in downtown hotels in order to make it to the White House campus during Snowmageddon, Part II. Even Deputy White House spokesman Bill Burton is telecommuting today, since staying at home "helps me shovel my front walk every 45 minutes or so."

And what about the president? With a commute of only a few feet, he stuck to his scheduled meeting with African-American leaders pushing for more jobs for chronically unemployed minorities.