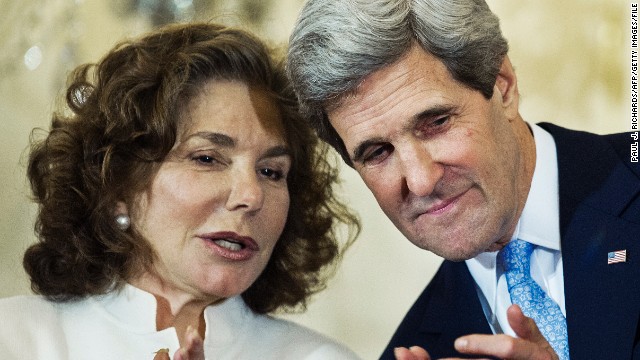 (CNN) – While much of the country is looking ahead to the next election, Hillary Clinton said she is squeezing every last moment out of her current job.

As secretary of state, Clinton isn't allowed to campaign or participate in domestic politics.

Washington (CNN) - A Chinese delegation in Washington to discuss human rights was treated to a field trip Friday designed to illustrate the importance the United States places on the rule of law.

The nine-member team, in town for the U.S.-China human rights dialogue, was hosted at the Supreme Court by former Justice Sandra Day O'Connor to discuss rule of law and the role of lawyers in society, the State Department said.

They then met Cardinal Theodore Edgar McCarrick at Catholic Charities Anchor Mental Health Center to talk about the link between religious communities and government in social services and humanitarian issues.

END_OF_DOCUMENT_TOKEN_TO_BE_REPLACED

Mitchell is already in Israel and plans to visit Ramallah, the seat of the Palestinian Authority, and Lebanon before heading to Damascus, State
Department spokesman Ian Kelly told reporters. Mitchell's visit is a follow-up to President Barack Obama's speech to the Muslim world last week in Cairo, Egypt, and part of his policy to pursue a "broad-based, comprehensive peace dealing with all the regional players."

"This is a very high priority," Kelly said.

U.S.-Syrian ties have been strained in recent years over the Israeli-Palestinian conflict, the war in Iraq and the ongoing political
struggle between pro- and anti-Syrian factions in Lebanon. The United States has not had an ambassador in Damascus since 2005.

END_OF_DOCUMENT_TOKEN_TO_BE_REPLACED

[cnn-photo-caption image= http://i.cdn.turner.com/cnn/2008/images/04/08/art.rice.ap.jpg caption=" Rice said Tuesday she's not interested in being McCain's running mate."](CNN) - Secretary of State Condoleezza Rice dismissed rumors on Tuesday she is angling to be John McCain's running mate, telling reporters she plans to head back to Stanford University.

"I very much look forward to watching this campaign and voting as a voter," she said. "I have a lot of work to do and then I'll happily go back to Stanford."

Rice served as Provost at Stanford from 1993-1999, and remains a tenured professor there.

"Senator McCain is an extraordinary American," Rice also said of the presumptive Republican nominee. "A really outstanding leader and obviously a great patriot."