(CNN) - After U.S. President Barack Obama and German Chancellor Angela Merkel discussed hot-button issues like America's surveillance programs during his visit to Berlin on Wednesday, the leaders addressed them with reporters.

Obama visited Germany, the United States' largest European trading partner, after attending a G8 conference earlier this week in Northern Ireland. Below is a quick look at what Obama said Wednesday - a few hours before he spoke to the public at Berlin's Brandenburg Gate - on European concerns about U.S. surveillance programs, Russia's disagreement with the United States over Syria, and more:

(CNN) - We'd long heard that Libyan leader Moammar Gadhafi admired former U.S. Secretary of State Condoleezza Rice. Back in 2007, he called her "Leeza ... my darling black African woman" whom he loved "very much."

Just words? Perhaps. Or maybe, as a discovery this week suggests, he really was quite impressed. 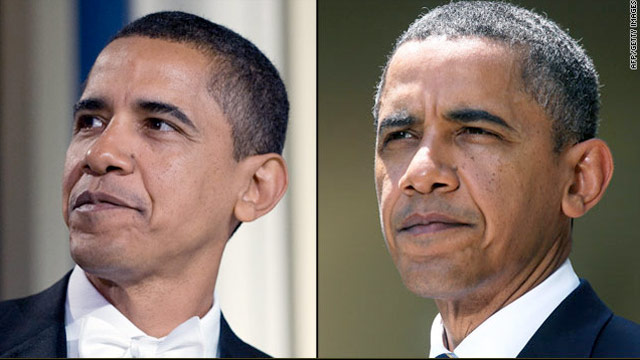 Do presidents age faster in office?

(CNN) - President Barack Obama has had the weight of the free world on his shoulders for 2.5 years, and he might be starting to look like it.

At 50, which he turns Thursday, his hair is a little grayer, and his face and neck are a little more creased, than on the day he took office in January 2009.

Murkowski appears to have lead in Alaska

(CNN) - Sen. Lisa Murkowski's bid to become only the second person to win a write-in campaign for U.S. Senate appeared on track in Alaska early Wednesday, with write-in candidates leading a Tea Party-backed Republican who beat her in a primary.

But even if the write-ins remained ahead of Republican nominee Joe Miller and Democratic candidate Scott McAdams, the outcome of Alaska's Tuesday general election apparently wouldn't be known for days, because officials need to determine which write-in votes actually went to Murkowski.
FULL STORY

(CNN) - Jon Stewart is not a newsman, but polls show he has the reach of one at the top of his profession. He's not a politician or an activist, but he's set to host a rally expected to draw tens of thousands to Washington's National Mall.

And with President Obama ready to appear on his Comedy Central show Wednesday - less than a week before the midterm elections - Stewart is reconfirming that he's more than just an entertainer and satirist.

Obama will be the first sitting U.S. president to appear on "The Daily Show With Jon Stewart" when it airs Wednesday night. He's been on ABC's "The View," NBC's "The Tonight Show," and other programs as president. But the show Obama picked for an appearance days before the midterms - with Democrats anxious to turn out the voters who helped propel him to the presidency in 2008 - is Stewart's.
FULL STORY

[cnn-photo-caption image= http://i2.cdn.turner.com/cnn/2010/images/07/21/art.capitolbldg4.gi.jpg caption =" The CNN 100 takes a look at the top 100 House races, from now until Election Day.."]
Editor's Note: In the final 100 days before Election Day, CNN has been profiling one race at random each day from among the nation's top 100 House races, which we've dubbed "The CNN 100." Read the full list here. Today's featured district is:

Democratic Rep. Baron Hill may finally be rid of a perennial political rival, but the always-difficult task of keeping his seat in Indiana's conservative-leaning 9th Congressional District appears to have gotten tougher.

END_OF_DOCUMENT_TOKEN_TO_BE_REPLACED

[cnn-photo-caption image= http://i2.cdn.turner.com/cnn/2008/POLITICS/06/23/campaign.wrap/art.car.gi.jpg caption=" Sen. John McCain wants someone to develop a battery that can "leapfrog" those available in current electric cars."](CNN) - Sen. John McCain is expected Monday to call for a $300 million prize for innovation that would help the U.S. decrease its reliance on oil, a day after his rival for the presidency called for greater oversight for energy traders.

Oil and energy are expected to be on the agenda as McCain campaigns in California and Sen. Barack Obama speaks in New Mexico on Monday.

McCain, during a town hall-style meeting at Fresno State University, is expected to propose a $300 million prize for whoever can develop an automobile battery that "has the size, capacity, cost and power to leapfrog the commercially available plug-in hybrids or electric cars."