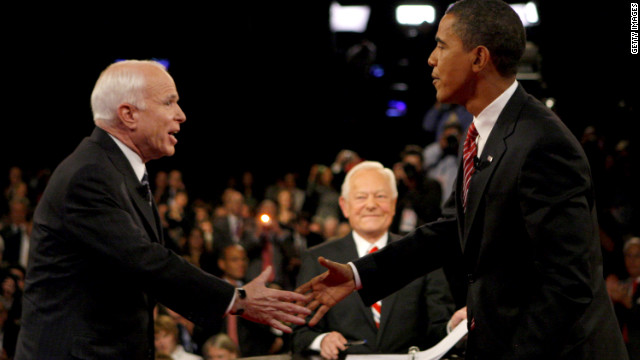 Bob Schieffer waits while John McCain and Barack Obama greet each other before their final debate in October 2008.
October 22nd, 2012
07:49 AM ET

(CNN) - Monday night's debate moderator, Bob Schieffer, is CBS News' chief Washington correspondent and has been the host of the Sunday morning discussion show "Face the Nation" since 1991.

His official CBS biography says Shieffer is one of the few journalists who have covered all four major Washington beats: the White House, the Pentagon, the State Department and Congress. He has covered every presidential race and nominating convention since 1972.

After the president told members of Congress that the plan would not pay for treating illegal immigrants, boos and hisses could be heard to Obama's left. Wilson's voice rose above the clatter, shouting, "You lie!"

Speaking near his Capitol Hill office on Thursday, Wilson called his outburst "spontaneous" and said he had apologized in a call to the White House.

"I taught Joe Wilson's kids. He is a good guy. I don't think this is in keeping with him," said Dave Woodard, a Clemson University political science professor who has known Wilson for years.

"He's a decent guy," Woodard added. "We all make mistakes, and I think he made a mistake."