Jindal ready for the spotlight 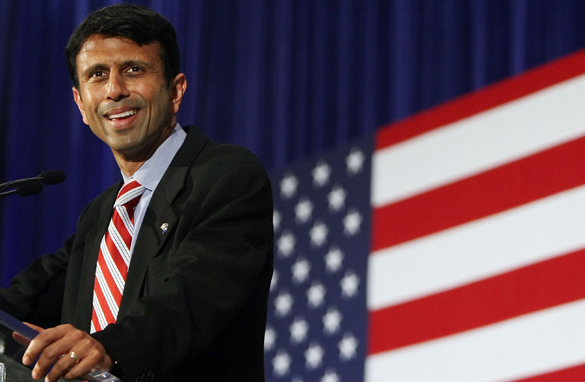 (CNN) - Thrust into the spotlight as a Republican rising star, Louisiana Gov. Bobby Jindal has been depicted as an up-and-comer capable of helping reshape the party and jockeying for the 2012 GOP presidential nomination.

And now, Jindal's party is putting him on a national platform, awarding the once little-known congressman the political plum of delivering the Republican's televised response to President Barack Obama's address to Congress on February 24.

"The speech is very important. This is his coming-out party," said G. Pearson Cross, head of the University of Louisiana's political science department, who has observed Jindal's political rise. "His speech will put a face on the name."

And put a fresh face on the Republican Party.

The GOP, still reeling from election beatings in 2006 and 2008, is looking to revamp itself by rebuilding from the states up and reaching out to young voters. At 37, the popular Louisiana governor embodies that mission, experts say.

"The job is very important in framing the Republican message really for the rest of the year," said Nick Ayers, executive director of the Republican Governors Association, referring to the response speech Tuesday. "Gov. Jindal provides the outside-the-beltway, not D.C., perspective. And he's one of the smartest policy minds in the country. He's not perceived as a overtly political person."

Being tapped for this prime-time speech, a job normally for congressional leaders, has helped to elevate Jindal's standing in the party dominated by old pros, including Senate Minority Leader Mitch McConnell and House Minority Leader John Boehner, as well as personalities, such as Alaska's Sarah Palin and California's Arnold Schwarzenegger.