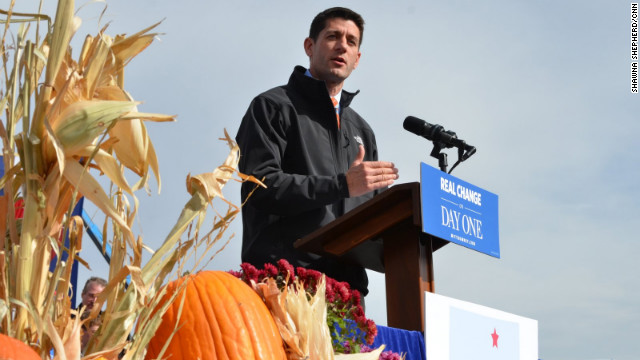 Obama floated the idea during an MSNBC interview on Monday, before Superstorm Sandy made landfall, so the Republican presidential campaign waited days to go after their Democratic challenger.
END_OF_DOCUMENT_TOKEN_TO_BE_REPLACED

Ryan set to campaign on 'are you better off' question

Greenville, North Carolina (CNN) – Paul Ryan, the Republican vice presidential nominee, will put the question that Democrats struggled to answer this weekend at the heart of his campaign message Monday: Are you better off than you were four years ago?

"Whoever provided classified information to the media, seeking political advantage for the administration, must be exposed, dismissed, and punished. The time for stonewalling is over," Romney said at a gathering of the Veterans of Foreign Wars. President Barack Obama addressed the group Monday.
END_OF_DOCUMENT_TOKEN_TO_BE_REPLACED

Romney reacts to 'kick in the gut' jobs report

"It's consistent with what I've heard as I've gone across the country and met with families in their homes, in cafes and restaurants and in break rooms," Romney said. "American families are struggling. There's a lot of misery in America today, and these numbers understate what people are feeling and the amount of pain which is occurring in middle class America."
END_OF_DOCUMENT_TOKEN_TO_BE_REPLACED

The letter claims spots created and paid for by the super PAC Restore Our Future erroneously suggest Gingrich was fined for ethics violations during his tenure as House speaker, saying, "These statements are NOT TRUE."
END_OF_DOCUMENT_TOKEN_TO_BE_REPLACED