Democrats, Republicans and this insane leap into the abyss

Washington (CNN) - When Genevieve Jeuck and Michael Sallemi came up with their romantic little idea, it seemed perfect.

They would get married in early October on the rim of the Grand Canyon, just as the cooling winds of autumn were starting to blow. With family and friends standing by, they would pledge their love to each other. Cue the rainbow, and the cry of the circling eagle.

Washington (CNN) - Confused about those forced federal spending cuts which kicked in on Friday?

CNN’s Tom Foreman is answering questions about sequester on CNN and CNN.com.
END_OF_DOCUMENT_TOKEN_TO_BE_REPLACED

Quick draw: How the NRA's LaPierre keeps his enemies guessing

Washington (CNN) - Wayne LaPierre is not a large man. He does not move with the easy assurance of a skilled fighter. His head sits low on his neck, and he seems to turn from the shoulders.

His swept-back, graying hair and rimless glasses make him look like a Central Casting accountant who sleeps with a tie on. Yet, in Washington, LaPierre is a heavyweight of the first degree, a brawler who can make even brave politicians toss in the towel at the first sign of a scuffle.

In their hands, they held electronic audience reaction dials, twisting them back and forth to record their approval or disapproval second by second, giving instant feedback and real-time ratings of the speech.

CNN Explains: How today's GOP has its roots in anti-slavery crusade

Washington (CNN) - Some may not realize that the modern Republican Party owes its origin to the fight over slavery nearly two centuries ago.

In the tumultuous mid-1800s, right before the Civil War, some political activists were concerned about keeping slavery from spreading into new western territories, and they saw no way to stop it through existing political powers: the Democrats and the Whigs (the pro-Congress party of the mid 1800s that largely destroyed itself in the 1852 elections in a battle over slavery).

(CNN) - For all the headaches on the campaign trail, you would not think a candidate would be hounded by his own dog.

That, however, has been the relentless fate of Republican contender Mitt Romney. A trip to Canada 30 years ago with the family pooch in a car top carrier, has been the gift that just keeps giving to Democrats. They've lampooned him as cruel at worst, foolish at best, with bumper stickers and T-shirts that say "Dogs aren't luggage!" and "Mitt is Mean!"

ANALYSIS: Obama and the politics of disappointment

Washington (CNN) - All politicians disappoint their supporters. It is a relentless truth in D.C.

They make pledges they can't keep, say things they don't mean, and encounter stiff headwinds in office that were just distant breezes on the campaign trail. The bigger their failed promises, the bigger the disappointment. 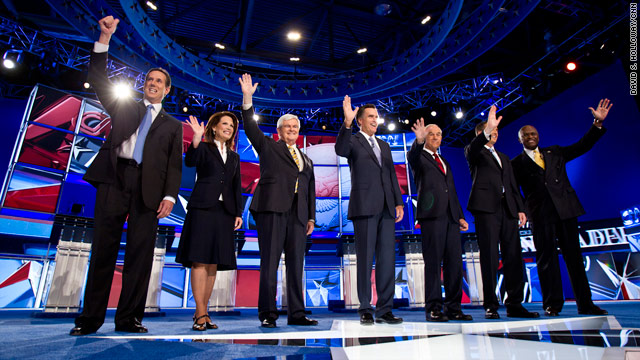 And what did researchers see there? An energized party fairly champing at the bit for the coming presidential election.

600: The perils of a presidential pen pal

(CNN) - Not long before he took office, President Barack Obama said something I am sure he now regrets. "There are a lot of people who seem to think they know how to run this country. I hope they'll let me hear from them." At least I think I remember him saying something like that. Anyway, it was a huge mistake, because I have now written 600 letters to the White House. One every day since he was inaugurated. It started as a joke. I thought the idea of sending armchair advice to the Leader of the Free World was funny and my first letter was really little more than congratulations.

But after I posted letters on the "AC360" blog for 10 days, a lot of readers liked them, so I extended the string to the first month. Then the first 100 days. Then 200. And now, I have written enough to fill two books. And yes, I am aware that this can look like either dedication or mental illness, depending on your point of view.

Most of the letters are funny, or at least they make me laugh. Like the one I wrote about his fancy new presidential limo.

(CNN) - I’m sitting at my computer watching a woman in Arizona shuffling through an array of firearms and emptying clip after clip into the desert. Terrorist? No. Tactical forces specialist? No. Republican candidate for Congress? Bet your sweet Beretta she is. And she’s not the only one packing iron as we head into this hell for leather midterm election.

We’ll get back to the would-be Laura Croft of Capitol Hill in a minute.