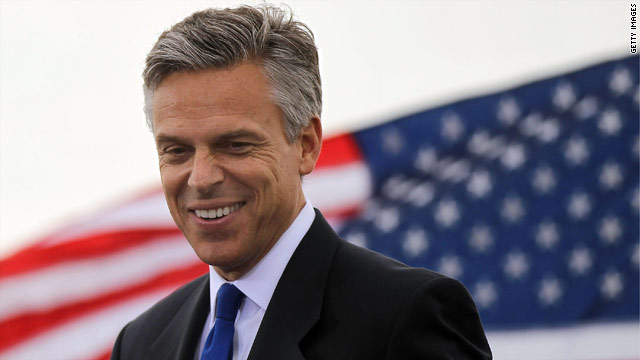 Jon Huntsman is for life, liberty and the pursuit of really great street food

A son seeks a political rematch

The younger Powell told CNN’s Don Lemon that he will officially announce his campaign Monday in Harlem. It will be a rematch as Powell lost to Rangel in the 1994 Democratic primary for the same seat. Powell, a New York assemblyman, denied he is motivated by revenge.

“I got that out of my chest in 94, the revenge, the settling the score … the reality is that if the congressman was not running I would still be just as enthusiastic about representing Harlem and Northern Manhattan in the United States Congress.”

(CNN) - Republican leaders Mitch McConnell and John Boehner took aim at the Democrats' health care proposal Wednesday, hours before the president is set to address the matter at a prime time news conference.

Boehner, the house minority leader, laid out his view of several "myths" he expected to hear from Obama: "First he'll say, 'If you like your plan you can keep it,' but clearly under the [plan], the congressional budget office estimates 23 million Americans will be forced out of their private health insurance into a government run plan."

"I can't find a single member who is not for trying to improve America's healthcare system," the Kentucky Republican said.

Both leaders also expressed concern with what they see as the president's rush to get a bill passed rather than addressing their concerns, and said they were willing to work with the White House on a bill on a slower timetable.

[cnn-photo-caption image= http://i2.cdn.turner.com/cnn/2008/images/10/14/art.williamsjr.cnn.jpg caption=" Hank Williams, Jr. is campaigning for McCain."](CNN) – Country music star and Monday Night Football fan Hank Williams Jr. has released a song in support of the Republican ticket. “McCain – Palin Tradition” - based on the Williams tune “Family Tradition” - was unveiled in a performance yesterday by the singer at an event in Virginia.

While John McCain receives top billing in the song’s title as the head of the ticket, the lyrics pay as much tribute to running mate Governor Sarah Palin. In a studio recording of the song, the vice presidential nominee is referred to as a “good lookin dish” and a “mama bear,” though the McCain campaign omits the “good lookin dish” line from its’ official lyrics. The song also touches on current events, blaming the Democrats for “bankrupting” Fannie Mae n Freddie Mac and Bill Clinton for forcing unwilling bankers to make “all those bad loans.” According to Williams this created the conditions for the financial bail-out which he characterizes as a “Democrat liberal hoo doo”.

The honky tonk-tune contains a lyric that seems to reference Barack Obama’s acquaintance with violent 60s radical Bill Ayers: “John and Sarah … don't have radical friends to whom their careers are linked.” In the studio recording the line is sung “don't have terrorist friends,” while the lyrics released by Williams’ publicist read “radical friends.” At a Virginia Beach, Virginia performance, Williams sung “terrorist,” while at a performance in Richmond he used “radical.”

Full lyrics after the jump:

END_OF_DOCUMENT_TOKEN_TO_BE_REPLACED

McCain: Obama might have to send troops back to Iraq 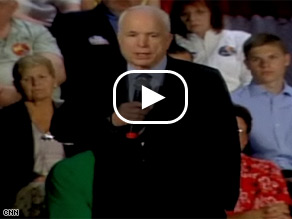 (CNN) - John McCain said Wednesday that a troop withdrawal from Iraq under an Obama administration wouldn’t be a lasting one.

The presumptive Republican nominee told the crowd at a Pennsylvania campaign event that Barack Obama advocated an “unconditional withdrawal” - a description of the Illinois senator’s policy that they debuted as he headed overseas several days ago - though he said “we are winning and we are succeeding” in Iraq, not a recent contention that the United States had already succeeded.

The Arizona senator also repeated his Tuesday charge that his opponent, for political reasons, is hoping for an American failure in Iraq: “Apparently Senator Obama would rather lose a war in order to win a campaign.” 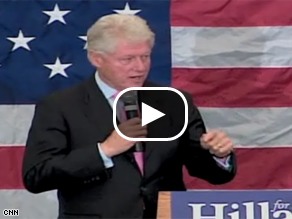 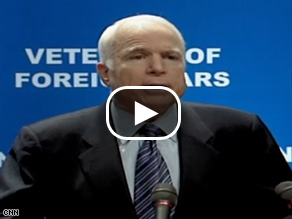